It didn’t take long before I took the next step in my Amateur Radio career. The Novice license was a one-shot deal: it was not renewable back then. (It is no longer offered today, but had become renewable later on.) It lasted two years and you either upgraded or quit. 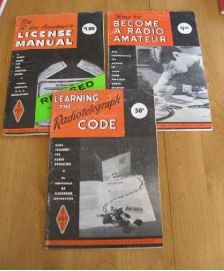 The next step up the ladder, at the time was General Class. It gave you the whole enchillada, every band, every mode, full 1kw power. To get it, you had to pass two tests: a 13wpm Morse Code test and a written test on theory and rules.

After only about six months, I was more than confident with the code. The theory would take some study, though. Another friend, Mark Christensen, was thinking of taking the General as well and we began to study and plan. Mark was a year younger than me, but we knew each other from school and had followed the same path beginning with crystal sets etc. Mark had his drivers license and before we knew it, we were driving to Buffalo and the FCC office in the Old Post Office Building, which is part of the ECCC Campus now.

In those days, they only held exams on certain days. We planned on a session that fell on a day we had off from school for the Christmas holiday. We weren’t the only ones, and the exam room was packed. I don’t remember it well, but the room for the code exam was a big high-ceilinged room. I was behind a pillar from the code set, one of those paper tape machines that sent perfect code like a player piano. But, I had no problem with the reception, despite the echoes in the room. It was a piece of cake compared to pulling a weak signal out of the static on 40 meters. I turned in my sheet with nearly perfect copy in block letters. I was certain to have one minutes worth in there.

The code test had two parts, though. They still required a test of your sending ability back then, although it was a mere formality. I don’t remember anyone failing that part, once they got that far. Most people were weeded out at the receiving test.

The examiner, a man, had a straight key mounted on a thin flat board connected to a code practice oscillator. Exactly the same sort of set everyone had used to learn the code in the first place. One by one, the candidates were called up and asked to send from a sheet of paper the examiner produced. When my turn came, I checked out the key. It was a bit stiff for my liking and the spacing was quite a bit wider than I was used to. (By this time, I had graduated to a semi-automatic, or ‘bug’ key at home.) I asked if I could adjust it to suit my self. The examiner said I could. So I began changing the settings on the key and sending a few test ‘VVVs.’ I began sending the sentence on the paper, confident that now that the key was perfectly adjusted for me, I’d show them how it was done. Apparently, the examiner was pleased enough with my demonstration of adjusting the key, that he was certain I knew what I was doing. He stopped me before I had barely got two words into the text.

I don’t remember the written portion at all. It must have been anticlimactic and gone smoothly, because I passed. Sometime later in January, my General Class license arrived. 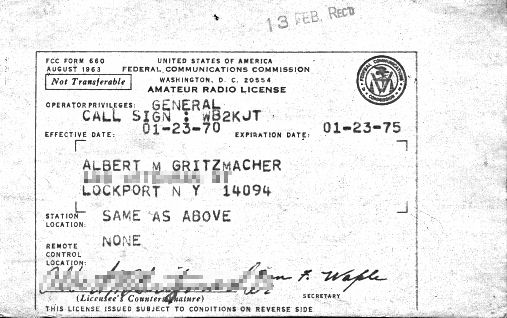 With the new license came great possibilities. More frequencies. Higher power. Phone (voice) operation. And no more being tied to fixed frequencies with crystals! I began saving my money and looked for a new transmitter. I eventually found a Knight Kit T-150 advertised in the Amateur Electronic Supply’s used equipment listings. They were a big Ham Radio supplier in Wisconsin and took a lot of equipment in trade. Their used gear listings were like the bible for seeing what the fair price of any equipment might be.

The T-150 was a kit, so someone must have built it. Was I taking a risk? AES was supposed to check them over in their repair facility, so it should be better than buying it direct from the owner. I took the chance and ordered it. Of course, this was pre-internet. In fact, I didn’t even have a checking account and if I did a check would have only slowed things down waiting for it to clear. So I trudged off to the bank and got a money order and sent it off in the mail. 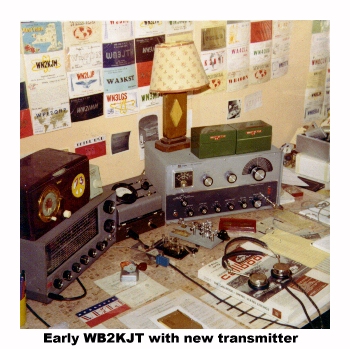 It seems like, compared to today, I did a lot of waiting. Waiting for a license to arrive from the FCC. Waiting for anything I ordered to arrive weeks later. But eventually, it did arrive. I unpacked it and I couldn’t believe my eyes. It was immaculate. There wasn’t a scratch on it and whoever built it, did a great job. It shined.

Of course, I put it on the air and retired the $13 DX-35 with the transformers on the floor. The T-150 had two 6146 tubes for finals and could put out 150 watts input. But best of all, it had a VFO built into it. I no longer was limited by crystals. I could go down into the lower parts of the bands where General licensees could go! It was great.

Eventually, I found a new receiver, a Hammarlund HQ-110AC (The ‘C’ stood for the clock accessory!) which was a much better receiver. I think I bought it at another one of the January auctions the Lockport Ham club held. I really wanted a Hallicrafters SX-101, like my friend Mark Veltman had, but they weren’t as plentiful and I couldn’t locate one for sale.

Auction equipment was a mainstay for me. I couldn’t afford brand new equipment, but the used gear was plentiful and sometimes a bargain. It was always an adventure. I remember a ‘Farnsworth’ radio I bought. It was a VHF radio from trains that the hams would convert to 2 meter FM. It weighed about 50 pounds and was three big modules – receiver, transmitter and power supply – on a big frame that they locked into. I don’t think I ever got it to work right and eventually traded it off for something else.

Another ‘boat anchor’ I bought at an auction was a home made 75 meter SSB transmitter. It was on a big chassis with lots of tubes and stuff. Schematics were very sketchy and while I did get it to transmit, sort of, I don’t think I ever made a contact with it. But it did give me a short, fast trip across the room when I brushed a plate cap with about 700 volts on it with my bare arm. I remember being thrown against the wall and ended up sitting on the floor with my back against the wall. My arm was numb for some time. Thank God the wall was there to catch me!

The one new purchase I made in the early days was my Vibroplex Champion Bug. A ‘Bug’ is a semi-automatic key, where a mechanical pendulum arm makes a series of dots for you when you push the lever one way. You still make the dashes manually, pusning the lever the other way. The side-to-side motion was very relaxing and once learned, much better than a straight – up and down – telegraph key.

I found an ad in a magazine from a company selling the bug for $19.95. Once again, I did the trip to the bank and mailed a money order. Then I did the waiting thing. After some time, I received a letter from the company. They wrote to inform me that the price had gone up to $21.95. So I trudged back to the bank for another money order. Eventually, the key arrived and I was the happy owner of the bug. Later on, the same company went out of business and, from what I heard, stiffed a lot of Hams for money they had sent. But I was a happy customer, other than the fact that they made me jump through hoops for $2 more.

Incidentally, telegraph keys of all sorts have become collectors items and the prices have gone up radically, even for brand new ones. (Yes, they still make them.) The $21.95 Vibroplex Champion I bought in 1970, went out of production in 1979, but a slightly better model is still made and the cheapest model costs $179 new! Today, I own three different ‘Bugs’ including the Champion, mostly to collect. I never use them on the air.