Life went on and things changed. I moved out on my own, eventually got married and Ham Radio went along. It wasn’t always a top priority, but kept coming back when time allowed.

Ham Radio was changing too. Incentive licensing came along and now that I had my General Class license, there was more to do. Now there were Advanced and Extra classes. The new licenses added more frequencies – privileges – frequencies that used to belong to the General class. It actually happened before I got my license, but now that I had upgraded, there was more to do. The Advanced license gave some more frequencies for voice work, but no big changes on CW. It was a lot of theory and probably the toughest test of them all. I think I took two tries, but eventually I got it. 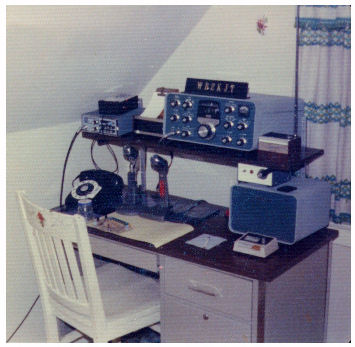 Equipment also changed. As you can see, I changed to a transceiver – a transmitter and receiver in one unit. This was a Heathkit SB-101, probably the nicest of a whole line of Heathkits. I didn’t build it myself, I bought it used, once again at a hamfest, probably, but did spend a lot of time fixing it up. Unlike the Knight Kit I had earlier, this one was far from perfect and I did a fair amount of fixing it, which was half the fun.

I lived in a third-floor apartment at this time and had a fire escape we could walk out onto. The same landlord owned the house next door and the fire escape ran from one building to the other. It gave me a lot of antenna options and I had a fairly good time with antennas. I kept many of them out of sight as best as I could. Thin wire and lots of working on them at night. The landlady either didn’t know or didn’t care. I had a full-sized 80 meter inverted vee with the ends running out to the back fence. I had a 40 meter sloping dipole out a window to the west. I had a 20 meter dipole between the two buildings and all sorts of VHF antennas. I even had a stealth 40 meter inverted vee made of magnet wire at one point that had one end tied in a bush with fish line not three feet from the sidewalk!

This was the station I had in 1976, the Bicentennial Year. The ARRL offered a special WAS (Worked All States) Award that year and I decided to go for it. I spent a lot of time hunting for stations in all 50 states that year, and accomplished my first major operating award. 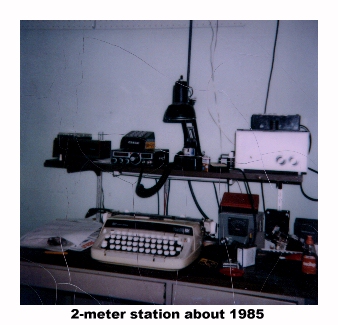 Later, when I moved to a different apartment, things werent as easy with antennas. The next place I lived, I had no outside antennas, only what I could do indoors. I did have a stairwell that I put some tall VHF antennas in, but HF work was difficult. I tried an indoor dipole once, but the results weren’t good and I was afraid of TVI. So I stuck to VHF.

I got active in the 2 meter VHF repeater scene. These radios were the first ones I could afford to buy new, as well, starting with a Heathkit. I built a crystal-controlled Heathkit 2m FM rig. Yes, back to crystals, but for repeaters, it wasn’t such a limiting thing. But when they came out with a synthesized version that would let you just dial in any frequency you wanted, I jumped at it. I bought and built the HW-2036, the only kit Heathkit ever recalled. Mine worked pretty good, as far as I could tell, but there were enough problems with the radio that they couldn’t solve, that they offered to buy them back, plus give a $50 gift certificate. Reluctantly, I accepted. Later they came out with another version of the radio kit that was improved and worked better, but by that time, I had heard of a new radio from Japan that was synthesized and smaller as well, the KDK FM-10…. and some more letters I don’t remember. KDK stood for Kyokuto Denshi Kaishia or something like that. It turned out to be a nice radio and I used it for a long time. I even added a little circuit to make it scan through all the channels. 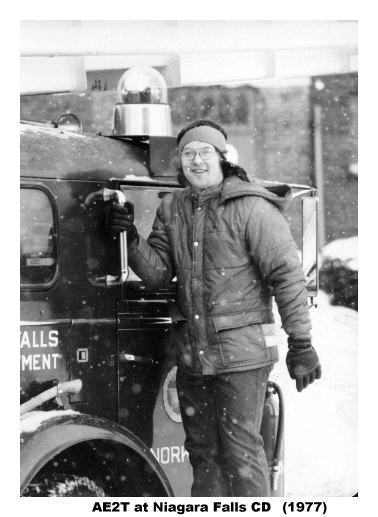 Being involved in VHF and repeaters meant a lot of contact with local Hams. Many of them were involved in Emergency Preparedness and public service. The nature of VHF radio and it’s short, local range made it very useful in those things. I did things like help out on marathons and boat races in the Niagara River. Simulated Emergency Tests where we drilled in case of emergencies. I even helped out in several Blizzards. In the Blizzard of ’76, I lugged equipment on foot to the local Salvation Army to set up communications with Buffalo there. In the photo here, I was at a Fire House in Niagara Falls where we put up antennas on a 100 foot tower with the help of the Firemen and their ladder truck. I had a shot of me in the air, but it’s gone today.

While I was off HF from home, I still longed for HF operation and contesting. When they started to offer a series of special callsigns for Extra class licenses, the gears started to turn. What could I do to get the best possible callsign for CW contesting? (I. e. the shortest!) The first thing they offered was 1×2 callsigns to people who already had an Extra class license. Most of them went to people who got their initials. But when they came out with a whole new series of prefixes and never previously used 2×1 and A-series prefixes, I thought that was for me. I started listening for people showing up on the repeaters with their new callsigns and asking them when they had taken their test and applied for the new call. I began to judge how long it took to get the new license and follow where in the series they were currently issuing. I was shooting for the ideal CW callsign: AE2E. I began to study for the Extra class test. Once again, it was the theory I brushed up on. I was confident of the code. When I felt the time was right, I took a Friday off and went up to the FCC office to take the test. By now it was in the Federal Office Building on Huron St., a more modern building than the old Post Office. The code was now only a receiving test, and you had the option of answering ten questions with fill-in-the-blank answers. That was for pansies. I turned in the five minutes of copy in block letters and was sure to get at least one minutes worth out if it. Of course, I had all the blanks filled in with ease as well. The theory test went well too and I passed. By now we must have been working towards the instant gratification we have today, because they told you that you had passed and gave you an ‘Interim Permit’ that allowed you to use the full privileges immediately. You just added a special designator to the end of you call in situations where you needed it.

Over the years, I had been to the FCC Office a number of times, both for Ham tests and for some of the Commercial License tests I had taken. There was one person that we had gotten to know over time, probably because she was the only constant person present in the office all along. It became a topic of discussion among many people who took exams there. The lady who handled the paperwork involved with the tests was an older, matronly lady known for her brusque manner and quick temper if you crossed her. She became know and the “Lady with Army Boots.” I don’t think she actually wore Army Boots, but she could have been a Drill Sargent. She didn’t administer the tests, an actual FCC Field Engineer had to do that, but she ran the office and did just about everything else, including collecting the applications and fees. The fee for a Ham license varied over the years, but I seem to remember it being $6 for a long time. You had to have cash and it had to be exact change. She did not give change, even if twenty people ahead of you had all turned in their money in $1 bills.

I remember one time I was taking a Commercial exam. It was not as crowded as the Ham tests got and they held it in a smaller office. There were about three people taking tests and we were all well under way. It was quiet and everyone was concentrating on their tests when a group of college students came in the door. it was a group of Broadcasting students there to take their Third-Class exams so they could work at a radio station. They had gotten lost and they arrived late.

The Army Boot Lady was going to turn them all away, but one guy, who seemed to be in charge, started to work one her. He apologized. He complimented her. He told her how nice she was and how far they had travelled. You could just about see the lady’s stern demeanor melt and a smile come on her face. She relented. He lined his group up and had them get their forms out to process. Then it almost all went down the tubes. Someone only had a $20 bill. The leader quickly stepped in and got everyone in the line to make change for each other until they all had the exact fee. The day was saved by a little organization and a lot of buttering up. Who says you can’t go far by being nice?

Oh, and my callsign, eventually it arrived and while it wasn’t AE2E, it was the next best choice, AE2T. Just one DAH instead of one DIT. Does it make a big difference in a pileup or contest? Probably not. At first, the confusion was bad. Now it’s just another call, but it’s sure a lot shorter to send. I think I’ll keep it.