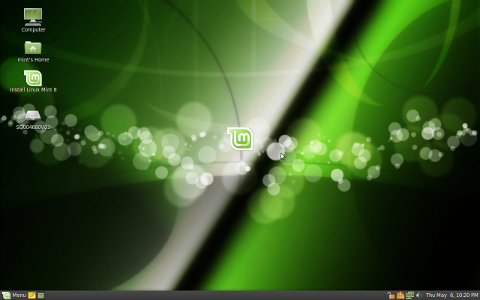 I’ve been playing around with Linux for probably close to 15 years and am still far from comfortable using it. I keep hold tightly to my security blanket of Windows.

The first time I tried to put Linux on a computer, I bought a set of disks, CD’s in fact and tried to put it on a spare computer I had. It was a version of Slackware Linux and featured the latest installer to automate the job. That meant feeding it disc after disc and watching as screen after screen of text scrolled by, periodically stopping to prompt you for some arcane information that I usually had no idea how to answer. I gave my best guesses and it worked, sort of. I got it to run and create a root account. I even had a graphical interface (X-windows) running on it and it recognized the mouse. But I could never get the GUI to match the screen size, no matter what I did.

Problem solving involved reading MAN pages, more arcane text that was seemingly endless and not very helpful. Oh, the answer was in there, somewhere, but finding it was the tough part.

Eventually, the computer got Windows installed on it and adventure of Slackware Linux was chalked up to experience. Over the years, I tried periodically to succeed with Linux installations. Over time, the experience got better, not because I got smarter, or learned much, but because the quality of the Linux distros got better and better. The people who wrote the installation routines got things so they installed the basics without needing to know every little detail about your motherboard or video card. They made it smart enough to detect all that on it’s own. I think the first successful Linux installation I had was a version of Mandrake Linux.

But I still kept going back to Windows. It was a love-hate affair, where it’s so easy to hate Microsoft and love the free, open-source Linux OS, but I was still more comfortable in the Windows environment and still had many programs that I couldn’t run in Linux or find Linux replacements for.

Things got better when someone invented the Live CD concept. You could put a Linux distribution on a CD and boot your computer from it and try out the flavour of the week in Linux. One of the best things about Linux and at the same time most annoying is they are constantly releasing new versions. I guess that’s what happens when literally anybody can contribute and update, or even write from scratch, parts of the code. It was nice to try out the various versions of Linux and they could squeeze quite a lot of extra software on a CD. But it still lacked one thing that a permanent installation had: the ability to remember customized settings like your password or network settings or browser bookmarks. Every time you took the CD out and powered back up into Windows, you lost all your fiddling around to make it work on the internet.

But it was worth it to see what the various brands offered. Eventually, with broadband access, downloading a new distro became trivial and I could try them out to my hearts content. I remember back when a lot of people were still on dial-up, I was involved with a group of Ham Radio operators who were trying out Knoppix. One person sent a set of CDs (five) to the next person on the list. Then that person copied them and sent the set on to the next guy on the list. Nowdays, with broadband, you just download it and everything fits on one CD, because all the extras get installed straight from the ‘net.

And someone figured, if you could put it on a CD, maybe you could squeeze it onto a USB memory stick. At the time, the Thumb Drives were smaller than a 700Mb CD, but leaving out some of the software made it fit. Now you could put a live version of a Linux Distro in your pocket!

Then another someone figured out how to save some settings onto the USB Drive and came up with what they called persistence, the ability to have your portable Linux remember your personal settings from session to session. Thumb Drives were getting bigger and bigger, too and it became practical to keep your whole Linux setup on your USB stick. The only problem I had was I could never get the persistence part to work. No matter what I did, it never stuck. It was still cool to boot up a computer from the USB drive, though.

Recently, I wanted to try the latest version of Ubuntu Netbook Remix, a version of Ubuntu customized for netbooks. I went to the Pendrive Linux site and they had a Universal USB Installer that made putting a variety of Linux distros on your USB Drive, including persistence! Of, course, I had to try it, and it works. Unfortunately, it didn’t have the latest, bleeding-edge version that I wanted to try, but the persistence was such a step forward for me that I had to play around with it. I now have my USB stick with the Netbook Remix version of Ubunto updated to 9.10, not the latest, but close, and another with Mint Linux 8 on it. In fact, I’m using it to write this post.

So I couldn’t try Ubuntu NBR 10.04 on the thumb drive, but I tried another way. More recent versions of Ubuntu have a way of installing them on a Windows machine without repartitioning the drive. The use a small program called WUBI (Windows UBuntu Installer) to create a filesystem in a big file on the Windows drive. Some trickery with the boot menu lets you select which operating system you want when you boot up. There is some loss of performance from doing it this way, compared to a “real” installation in it’s own partition, but it’s not very noticable. Unlike the traditional Linux installs, removing a WUBI install is as simple as going to Add/Remove Programs in Windows and saying goodbye! So now I can try the latest version of Ubuntu too, at least until the next version comes out.