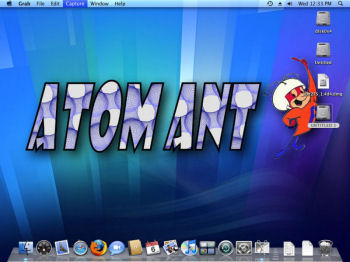 [Previous article on this topic.]

After quite a bit of playing around, the mini PC is finally pretty much done. I got the OSx86 partition running and the menu at bootup to choose between operating systems is tweaked to work with all three. Almost everything that should work, works on all three OS’s – sound, network, video, DVD burning. Even filesharing with my local network is almost there and that’s sometimes problematic even between two Windoze computers.

After some time playing around with Windows XP, Ubuntu Linux and Mac OSX Leopard, I’m getting used to finding my way around them pretty well.

Of course, I’m very comfortable using Win XP as I’ve been using that on most of my boxes for several years now. I decided to stick with XP rather than Vista just because I was sure XP would work. It’s service pack 3, so all the latest patches are there. Vista would probably be alright too, but I don’t see the expense.

Ubuntu has been the surprise. I loaded their Hardy Heron version 8.04.1 and it refused to install. Several times. But version 7.10 installed in a snap. I even tried upgrading from 7.10 to 8.04 but it still failed. I’ll wait until 8.10 and try again. Getting the network card, an on-board chip, to work needed some work. After a couple new versions of the drivers, a new BIOS flash for the motherboard and a few other tips found online, it finally started working and working every time.

Getting a network connection working on a new computer is priority number one these days. You can live with a default video driver at 640×48 resolution or no sound for a while, but having that access to the internet is essential for finding the fixes you need for all the other little bugs. This is true no matter what OS you are installing.

The MAC install at first didn’t work. I had a bad disk image for one type. Then I tried another installer and it didn’t quite work. I finally spent time to run the MD5 checksums and verify the image of the first one and remade the disk. This time it worked and installed OS X easily. I have to say, I didn’t know what I was doing most of the time, since I’m totally ignorant of Mac stuff, but it wasn’t hard to install, even though I had to choose some settings far from the defaults.

Once again, it took a new driver for the Realtek network. Both the Realtek drivers and the Intel BIOS had recent updates, no doubt due to issues people were having with these things. Once it was installed (switch to Ubuntu, download it, put it in a directory on the Windows drive so I could read it from the Mac install, then switch back to the OS X system.) it installed and the network came up and ran. Sweet.

I’m still holding back on my opinion of the OS X operating system. I want to find some great breakthrough so I can say “Aha – it IS better! My life is now complete!” but I don’t see that happening. I still don’t get all the claims about how easy a Mac is, or how foolproof, or any way it is better than Windows.

True, you don’t have a lot of the cheap, buggy software you can find for Windows. But if you look for a piece of software to do a certain thing on a Mac, all you find is one or two choices. With windows you will find a hundred and yes some are junk, but some are keepers too. And some are a lot cheaper for Windows than for Mac.

Yes, a Mac is easier than Windows, if a Mac is all you know. Go ahead and live in fear of viruses and spyware with your head in the sand. Windows users know how to handle them.

My biggest surprise has been Ubuntu. I like it. Really, I do like it. I’ve dabbled with Linux installs for over 10 years. My first was a trial by fire installing Slackware Linux on an old 386 box that was a spare. I spent probably 4 hours feeding it CDs and answering prompts on the screen with it’s 100% text-based installer. I got it working, but never got the X-Windows part of it to work right. It would never match the right screen resolution. It was also back in the dial-up days and although I did get it to dial out with a modem, getting help online was a slow process back then.

Over time, I’ve tried other Linux versions, some so obscure, I don’t even remember the names. Over time, they have gotten better and better. Suse was good a year or two ago. So was Mandrake/Mandriva when I tried them. But none of them ever was quite where I got comfortable enough with them to use day-to-day. Ubuntu is finally there. For all I know the latest versions of some of those others might be too, but I’m sticking with this one.

One of the breakthroughs with Linux, in my opinion, is the advent of Live CDs. These are versions of Linux that you can put the CD in the drive and reboot and try out the system without altering your computer at all. When you like it, you can just install from the same CD. This gives you a pretty good idea what you’re getting into and if it will work with your particular hardware or not.

So, right now, I’ve got a single box with the best of three worlds in it. How can you beat that?