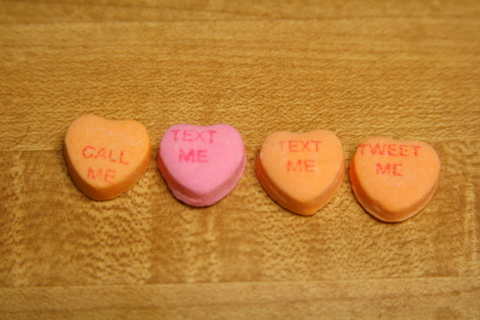 No, this isn’t about a medical breakthrough. We’ve all seen and eaten those candy hearts that seem to be everywhere around Valentine’s Day. They are about 100% sugar and have some clever saying on them. Well, as clever as you can get in about 10 letters and two lines.

I found some interesting ones in this year’s batch:

They’ve updated the little slogans for the modern day. They’re catering to the smart cell-phone crowd, apparently. The first heart in the photo says “CALL ME.” Okay, that’s probably not so new.

The third one, though, just proves the end of civilization is near and we’ve just gone too far. It says “TWEET ME.” Go figure. Candy that Twitters…