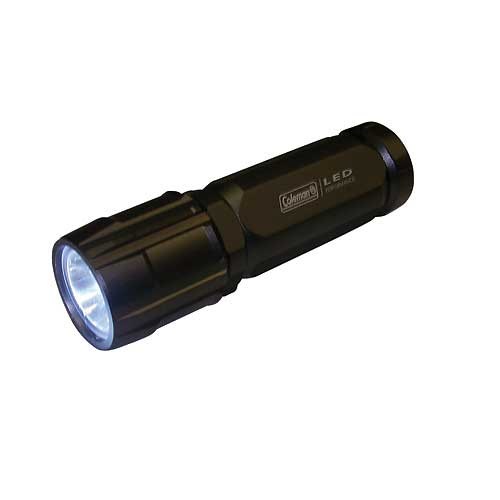 Why an interest in LED flashlights? Well, it’s an offshoot of the bicycle lighting research I’ve done. Both are ever-changing with better technology coming along every year, mostly due to the advances in LED design.

This is totally unscientific, but based on two LED flashlights I currently own. I have an older one that has multiple LEDs that comes nowhere close to these two, so I thought maybe most people don’t realize what is out there in this niche market. 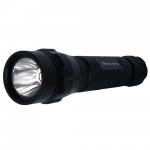 The one thing that makes these flashlights different than their predecessors is their high-powered, high efficiency Cree XR-E LED. If you are not familiar with this company, or think you know about LED brightness based on what you may have seen in the past, you are in for a surprise.

I had bought the Coleman last summer in Wal-Mart for $30. I put it in my panniers for bicycle camping and have been using it for that purpose. It would make a good bike headlight too, if I had a mounting bracket for that purpose.

I found the Norlite recently in a truckstop and was surprised by it’s brightness too. It was also $30. So I bought it.

Only today did I think to compare the two. I got the Coleman out of my camping gear and did some A/B comparisons. The Norlite is slightly brighter and whiter, but only by a narrow margin. The LED modules look nearly identical, although you can’t get the Coleman open to see much of it. That makes sense, as the Cree LEDs are a module with the LED mounted on a small circuit board. They do make enough heat that dissapating heat is needed and incorporated into their design.

So, which one is better? It’s really too close to tell. They are nearly equal. The Coleman has two minor strikes against it, to me, slightly less bright and white light and it uses 3 AAA batteries. The light difference is very slight, though and the specs do give the Norlite an edge. But I hate anything that uses an odd number of batteries. You can’t buy them in packs of 3 so there is always a wasted left-over cell somewhere.

You would think that using AA cells would give longer life due to their larger capacity, but the Norlite claims slightly less time than the Coleman. 5-6 hours doesn’t seem like much, but how long can you leave that old fashioned 2 D-cell flashlight on before it goes dim? And it weighs a lot more.

The Coleman has a slightly orange-peel finish to it’s reflector as well, which slightly diffuses it’s beam. It still casts a pretty good light. Both lights give a bright central spot with a wider beam at a lower intensity, just as you’d expect. There was not a noticeable difference in the beam sizes.

The Coleman is shorter and stockier, while the Norlite is slightly longer and thinner. I didn’t find any preference to one over the other, but some people might have one. The end-cap switch on both is very similar with a nice recess on the Coleman.

So they are both great lights at an affordable price. Either one would be great for the glove compartment, night stand in case of power outage, or in the toolbox. For camping, they make a good personal light for walking in the dark. Both seem to be readily available, with the Coleman available in Wal-Marts everywhere.

If you think all this talk of Lumens and Cree LEDs is obsessive, you haven’t seen nothing yet! Check out this flashlight that isn’t even available yet and is seeking funding on Kickstarter. It’s the HexBright Open-source flashlight and promises either 350 or 500 lumens depending on the model. You can order yours by pledging to it’s Kickstarter page and when the capital is raised, production will commence. How is it open-source? Well, it promises to be programmable, for what that is worth.

The most obsessive flashlight, LED, bike light and any thing else to do with that sort of thing, site of course is Candlepower Forums. If you want to learn all about those things and what is new with them, go spend a couple hours reading there.