This is a followup to two earlier posts I made about bicycle taillights. Bike lighting is something I’ve been interested in because it’s become a fascinating area of the application of new technology to an old problem. That and I guess I’m obsessed with bright lights! 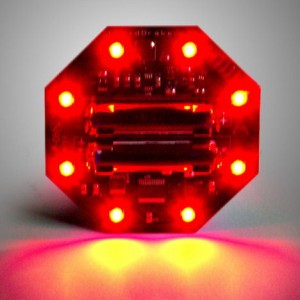 I received an email today from the developer of the LucidBrake Bike Tailight. They had found my post that mentioned their prototype and wanted to let me know that they have begun a Kickstarter project to get it up and running.

The light has evolved quite a bit since the video I showed in the post two years ago. It is now a octagonal PC board with the LEDs arranged in the corners. It is completely automatic, sensing motion and turning itself off when parked. It flashes while riding, but the big feature is that when it senses you coming to a stop, it flashes all the LEDS together brightly signalling a stop. It also has a different mode when it senses a sudden stop vs. a normal stop. Both should enhance a cyclists safety greatly.

I like this idea – a lot. I considered the Kickstarter option, but the lowest level to get a single unit was already sold out. To get one now, you need to buy in at a higher level. It just seemed a bit high for me. You might not mind, but I’m a retiree on a fixed income. I had to think long and hard about the Dinotte I bought, and while this is less than that, I’m not ready to speculate with my money.

Here’s my thoughts on the light and whole concept.

1. It’s on Kickstarter today, but will Cateye or Planet Bike be coming out with a light with these features in a year? Will they see this and come out with their own version at a price lowered by the economy of scale? Is this patented?

2. It needs a plastic case. Despite the argument that it saves mass and that the conformal coating is the greatest thing since sliced bread and all it needs, I think that to get consumer acceptance, it needs a plastic enclosure like other bike lights. First, if you take it off the bike and stick it in your jersey pocket, you don’t want the battery contacts snagging your $100 jersey and pulling it. Secondly, the case could include a passive reflector, something that is necessary for CPSC approval.

Overall, I like the light. I really like the concept. My biggest problem with taillights is not battery life or visibility. It’s hopping on the bike and riding away having forgotten to turn it on. Not a problem here. I like the use of the 3M fastener. It’s like Velcro, but stronger. I’ve used some of the newer 3M products and they are amazing. Forget all your preconceptions about hook-and-loop fasteners, these are way better. I do think that some form of bracket might be useful to complement it. Flat surfaces are hard to find on a bicycle, as are perfectly vertical or perpendicular to the rear surfaces. An adjustable bracket that allowed alignment and then held the dual-lock material for quick removal could be useful. Maybe an optional accessory?

The brake light function alone is unique, something I’ve only seen once before and that required a switch connected to the brakes. The key to riding a bicycle safely in traffic on real streets is to be able to be recognized by drivers as a vehicle on the road following the same rules as they do. Drivers that see a bike rider as a fellow vehicle operator then know what to expect and react accordingly. Having a functional brake light can only help in this regard.

This light is such an improvement over traditional ones that it should become a success. It’s ideal for adult cyclists who want high visibility and safety, as well as the convenience of not worrying about whether you remembered to turn it on. It would also be great for children’s bikes. Put it on their bike and never have to worry whether they are using it or not. Plus the cool-factor will make them all want one.

What this product needs is mass-acceptance. If you could buy it in WalMart for $9 or better yet, if it came installed on every bike, it would be the bomb. Or built into helmets? I hope it gets to that point, but until then there is Kickstarter, if you want one.

Can you say Shark Tank?