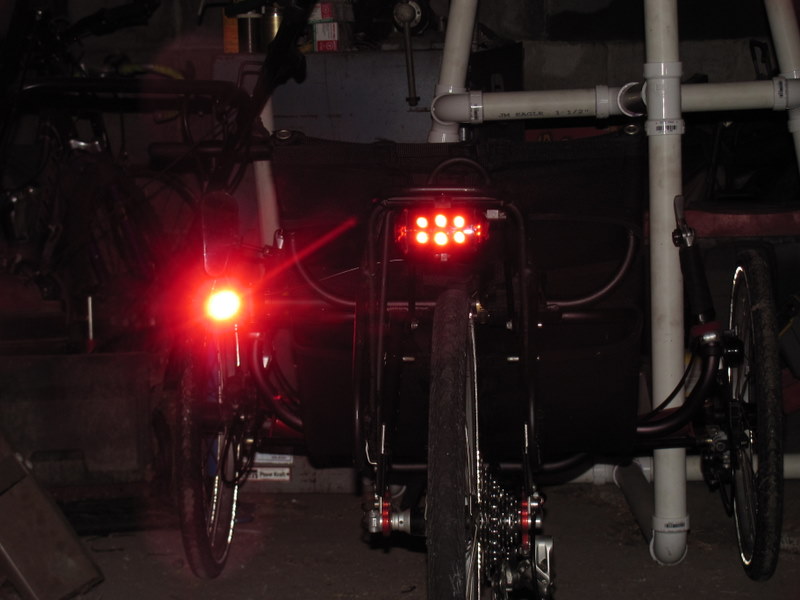 After a couple months, I finally broke down and bought the Dinotte 140R bicycle tail light. It is by far, the brightest LED tail light available and has been shown to be effective, even during daylight, in being seen by cars approaching you from the rear. The light is painfully bright, so much so that it gets attention other lights don’t get. Maybe it’s curiosity, maybe it’s annoyance, but drivers wake up and give you a wide berth when they see it. Video of the lights is at the end of this post.

Some other innovative bicycle lights have come across my computer screen. I haven’t tried any of them, but they are worth considering if you’re in the market for such a thing. 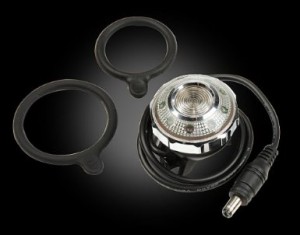 Magicshine bike taillight seems to be in a similar vein to the Dinotte light. It has a 3-watt LED, O-ring attachment and external battery pack much like the Dinottes. I haven’t seen one in person, but it seems like a less-expensive imported light that may be nearly as bright. The downside that I see is that it runs on 4 18650 batteries, which are a little obscure to find. I do believe they are available in rechargeables, though, so you could make it a one-time purchase.

This light isn’t strictly a tail light. But it adds spectacular visibility to a bike in a very unique way. They’re not cheap, but not outrageously expensive for what they offer. Give ’em a couple years and Wal-Mart will carry them and get the price down to $10! They are a commercial product that is an outgrowth from a Make Magazine series of projects called Spoke POV (for persistence of vision) that draw an image in the air using the wheel’s rotation to move them.

Make Magazine Online describes one such project as such:

This project consists of three circuit boards with a row of 32 LEDs on each (actually 64 LEDs because they’re double sided). The circuit boards are mounted radially in the spokes of a bicycle wheel and batteries near the hub supply power to them. The LEDs are controlled by a microcontroller that measures the rotational speed of the wheel by way of a hall effect (magnetic) sensor. As the wheel rotates, the microcontroller turns the individual LEDs on and off in such a way that a static image appears to float inside the wheel. Another similar product is available at Hokey Spokes. Kits are available for the DIY types at Adafruit Industries as well.

A new and promising tail light coming out soon is called Lucid Brake. This looks like a standard bike tail light at first, but with one important difference: it functions as a brake light. Some kind of sensor inside the unit (probably an accelerometer chip) detects when the rider applies the brakes and goes from the standard flashing mode to full-brightness solid red. And it does it without any external connection to the brakes. There are a couple other bike tail lights that function as a brake light, but they need a kludgy switch added to a brake to switch the brake light.

This light isn’t available yet, but looks like an instant hit when it does. The brightness looks good, still commanding some attention even in daylight and the brake light really stands out, as it should. They’re recruiting dealers now and promise to start selling it through home shopping channels first. Eventually, it should get to retail stores.

One thing these lights all show, one way or another, is that new technology is reaching into even everyday items. Whether it’s a super-bright LED instead of the old, anemic ones, to circuits powered by sophisticated microprossors (the Spoke POV lights are Arduino-based) and sensors, they show how cutting edge technology improves mundane products when applied in innovative ways. Even improved battery technology, like the Sanyo Eneloop makes these lights practical.

A very short video of the two taillights on my trike. The one on the left is the Dinotte 140R and on the right is the Cateye LD-1100. Despite having six rear-facing LEDs, the Cateye is outshone by the Dinotte. The vertical streaks are artifacts from the lights overpowering the video camera. (It’s a good still camera, but a very mediocre video camera.)

But the artifacts are interesting in themselves. Notice the Dinotte’s streak turns into a dotted line while it is in it’s dimmer phase. This tells me that they are pulsing the LED on and off to reduce the brightness by lowering the amount of time it is on, or duty-cycle. This is a very good technique with LEDs that ensures consistent operation overall.