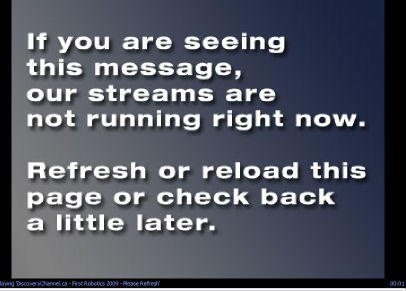 Spent the day following some of the FIRST Regional competitions online again. The Toronto Regional was fun to watch because I know so many of the teams. But in typical internet fashion, after the lunch break, the feed went to crap.

It started out with a good feed, the video was clear as can be expected, but you could tell it was a token effort by Discovery.ca. One camera angle that never changed and the audio went on and off like they just cranked up a noise gate. Nothing kills the excitement of a robotics match like silence whenever the announcer isn’t talking.

(I read a posting on Chief Delphi, an unofficial FIRST robotics forum, that the TV crews had been cut back drastically due to economic cutbacks. They were probably lucky to get them there at all. Many of the regional video coverage isn’t done professionally at all, just put up on ustream or Stickam.)

But once they got into the final rounds, the connection got really spotty. The video was so bad you couldn’t see anything in the score area and the robots were blurry. That is when you got it at all. I switched to the Palmetto Regional for a while just because it was watchable. They were being fed out of Clemson Univ. and the quality was better. They had the same woman announcer as we had at Philadelphia.

Los Vegas had a regional going too. I caught the opening ceremonies briefly. Some of them are canned video that is the same at every one, so I didn’t need to see it again. But they did have an Elvis impersonator at one point. How Vegas!

Another regional in California was also online. The announcer sounded like a professional radio/TV person and sounded good without all the excitement some of them try to add. I think some of the announcers go too far. They use silly costumes and antics to try to relate to the kids. I have a news flash: kids today are too smart for that. They are so savvy that you run a risk of being perceived as condescending if you try that. Treat them like they are intelligent. The announcer at one of the western regionals was pushing it. He was a tallish guy with a pony tail and Hawaiian shirt (an old FIRST tradition) but we didn’t need the somersaults he did.

Speaking of Hawaii, the Hawaii regional was there too and due to the time zone difference, provided entertainment well after the others were done. It made a full day of robotics.

I didn’t watch the Michigan regionals today. That was an oversight. I saw two on Friday, but today, I watched mostly feeds that were in Windows Media format and had a little playlist I could jump from one to another with. The MI regionals were all Flash based and I found them on ustream.tv. The trouble with that is whenever I got more than a couple open at once, things got slow and even froze sometimes. With the playlist, you only saw one at a time, but could switch easily. I guess video on the internet is still far from perfect.

Even when I wasn’t familiar with the teams involved and had no preferred team to root for, it was exciting, though. The Hawaiian teams had some close matches even in the final rounds and some matches were decided by a penalty or bonus Supercell.

I got a comment on my post from yesterday that led me to a similar post by someone in California. Check out the Chicken Blog and her take on a FIRST Robotics competition. Natalie, the Chickenblogger, has a son on Team 2102 if my detective work is correct. She was really into the excitement of the regional competition.

That’s the thing I always find when I try to describe the competition to someone. No matter how interested they are and how much detail the description of the game goes into, you just have to go to a competition to get the full effect. Once you do, you’ll be hooked!