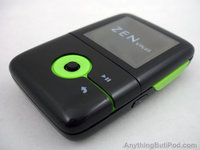 I decided I wanted to get a new MP3 player recently. I’d sort of been wanting one for a while and hadn’t really seen anything I really liked.

I love the iPod (any of them) from a hardware standpoint. (Except for their proprietary connectors, but they’re not alone with that.) They’re beautiful machines. But Apple continues to insist on using them as a marketing platform to promote (force you to use) iTunes. The default way to load songs on them is iTunes, the only way to buy music online for them is iTunes, they force you to use the same computer or it wipes the player clean, nasty DRM, etc.

Yes, I know there is other software that can upload songs to an iPod. My daughter uses Winamp. But I just think when you buy an appliance, you should be able to use it however you want. You’d freak out if you bought a refrigerator and could only put groceries in it from a certain store, right?

I have an old player that still works, a Rio Karma 20GB. In it’s day, it was billed as the next iPod-killer. (2nd-gen, anyway) It’s crammed full of songs and has given good service. It’s a great thing on a road trip – never hear the same song twice. But it’s getting pretty beat and it’s only a matter of time until it dies. I used to listen to it at work and it got pretty scratched up. The scroll knob is gone too, but fortunately, you can use it without that. The display is funky as well, with a dead zone at the left side.

So, I thought it would be nice to have a player, maybe just for podcasts and looked around a bit. I didn’t need another 20 gig (or bigger – you can get 160g now.) so I seriously considered flash-based players.

I did some online research and narrowed the field down to two choices, the Creative Zen V Plus and the Sandisk Sansa e200-series players. But while I was looking at the Sansa players, I saw they had a new model called the Connect that had wi-fi built in. Hmmm… I had visions of listening to internet radio and even my own local Icecast server. But the price was a bit high.

When I got to the store and was looking at them I asked the salesperson if they had the Connect. He said yes and it was on sale for less than the 4gb e200s. I decided to give it a try. That will be the subject of another post here, because it will take that much space!

I ended up returning the Connect. The sales person had said I had 30 days to try it and could return it if I didn’t like it. It only took one day. I went back and turned off by the Sandisk, bought the Zen V Plus. So far, I’m happy. It’s not wireless, but I didn’t expect that originally anyway.

The biggest shock seeing it in the store is how small it was. The pictures on the internet lose all scale and you think it’s bigger than it is. It’s about the size of a small matchbox, or a little bigger than a book of matches. Not quite as big as a Zippo lighter… well, it’s tiny. Let’s put it this way, you always wondered what that little pocket in your 5-pocket jeans was for. Now you know. But it still has a little OLED screen and can show video and photos.

I ignored the warnings to install the included software and just fired up Winamp to put a few songs on it. Actually I put a few podcasts I wanted to listen to but hadn’t because I didn’t want to be tied to the computer that long. The idea is to be able to listen to them and go about other things…

I had read online the the Zen a.) worked fine with Winamp as a media center and b.) could even be accessed directly like a USB drive. So I wasn’t hesitant to forge ahead without Creative’s software. Later, I did install it out of curiosity. It seems pretty nice, in some ways similar to the Red Chair Software RioRad Manager I use with the Karma. I looked later and sure enough, it integrated with the Windows context menus and you could add a song to the player just by right clicking the file and choosing that from a menu. Just like RioRad. I’ll have to check and see if Red Chair makes a version for this player. I know they did for the hard-drive based Zens.

Playing around with the Zen V Plus was a bit dicey. I tried it without reading the manual and it’s not entirely intuitive. The little button in the middle of the player works like a joystick – up – down – left – right and press for in – but the two surfaces to the right of that act as buttons as well. I got the play/pause icon right away, but the other had a bent arrow like the one on your enter key and didn’t seem to do what I expected. Reading the manual, I found out it is a back key, taking you back up the menu layers. Hold it in for a couple seconds and it gives a contextual popup menu for things like deleting songs. Once I grasped that button, the manual went back in the box, it’s that easy.

I haven’t really gotten into making playlists yet, but I usually just shuffle everything when I’m not listening to something particular. Since I plan on mostly podcasts on this player, playlists aren’t top priority.

Some cool or not so things this little player does:

Recording. Yes, it can record either from a built-in microphone or a line-in cable. I played with it a bit and it’s not great, but does work with the built-in mic. I won’t be replacing my Marantz PMD660 with it, but since it’s so small, it may come in handy in a pinch.

Photos and Video. I put a bunch of photos on it just to see how they looked. It was easy to do with the Creative software and supposedly resizes them automatically to save memory. The screen is so small you wouldn’t use it in place of one of those smart picture frames, but it is pretty clear. One person can hold it and see a slideshow pretty well, but you won’t be able to show a group of people all at once. Video isn’t too important to me, but I would imagine it is about the same – adequate for one person.

Organizer, Calendar, Data storage etc. None of that is too important to me. The clock in it is nice and I figured out how to set it easily. The rest requires the Creative software and your computer to set up, so I’ll probably never bother. I never go far without a flash USB drive in my pocket, so I don’t need it for data. I’d use the calendar if it would synch with Rainlendar, the calendar I use on my computers. But it doesn’t. It supposedly synchs with Outlook, though.

What else? It doesn’t come with a charger. To charge it you plug in the USB cable and let it charge off the USB ppower. You can get an optional charger (or probably any generic one) for either AC mains or the car. You have to watch out that you get a charge off the computer. As the manual warns you may not be charging if the computer goes into standby or if you plug into a unpowered hub. But that’s standard USB stuff. It uses a standard USB mini connector, in fact I’m using the one from my camera at the moment, which is reassuring to know I don’t have to worry about losing some special cable.

Creative makes this player in versions of 2g 4g 8g and 16g. I got the 4g, which is plenty for what I want to do. The 8g is a bit pricey and they didn’t carry it at the big chain electronics store I bought it at. The 16g is talked about on the internet, but hard to find for sale. Maybe if memory prices continue to drop it will come out. The jump in price from 4 to 8 gig is significant, I imagine the 16g model would take a mortgage to afford.