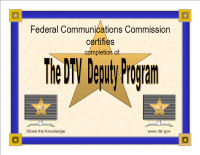 On February 17, 2009 all full-power broadcast television stations in the United States will stop broadcasting on analog airwaves and begin broadcasting only in digital. Digital broadcasting will allow stations to offer improved picture and sound quality and additional channels.

My prediction, should you care, is this will be the beginning of the end of over-the-air Television.

Oh, sure, I’ve seen Digital TV. I have one. I have it connected to a full-sized, rotating antenna. It takes that much to get it to work.

When next February rolls around, it’s going to become apparent that the majority of people use either cable or satellite to receive their television and just don’t care. They might even have DTV-capable TVs, but nothing will change for them. The few who don’t and still get their TV over the air, will either be caught off guard, have bought converters or have DTV-ready sets. Of those who have the boxes or DTV-ready sets, many of them living in fringe areas will be disappointed by the digital signals.

But despite all the outcry, those who lose their signals won’t be a big enough number to change a thing. It will very rapidly become apparent that the expense of large transmitters and the electric bill to keep them going, is immaterial. Any local TV stations that survive, will simply pipe their signal straight to the cable and satellite companies. My prediction, within 10 years, most on-air television will vanish.

3 comments on “My prediction…”