I’ve been working on a new solar panel for the bike. The one I have now is long and narrow. It puts out 15 watts and hangs off the back of the trailer. 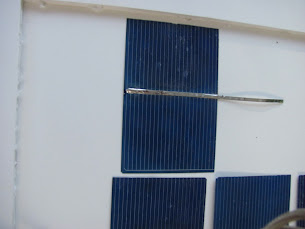 My goal is to replace it with one that fits it in the recess in the top of the plastic bin on my trailer so it doesn’t hang off at all. With more efficient cells it should be about 20 watts despite the smaller size.

I shopped around and did some research and decided I could build my own. I could fit 36 2×3 inch cells into the space available. After my trip got put on hold, I decided to forge ahead with the build and I pulled the trigger on ordering the parts.

I bought the cells – 50 2×3 inch cells, a kit of tabbing wire, a blocking diode, a junction box, etc. I made a frame out of aluminum from Home Depot and plexiglass from Ace Hardware. Crystal Clear caulk by DAP seals and acts as an adhesive around it. 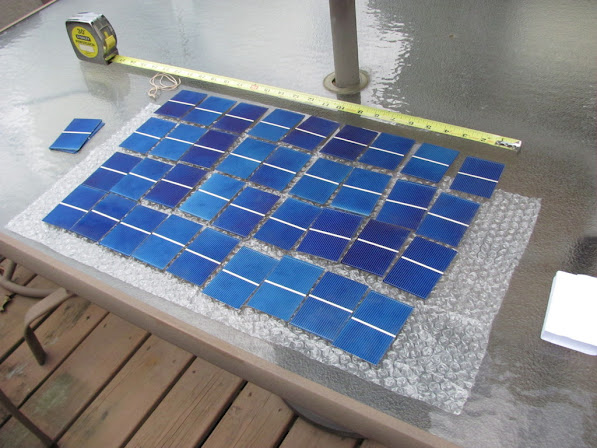 I’m over $100 into it and I’ve gotten $1000 worth of education out of it. If I had known what I was getting into, I probably wouldn’t have done it, but I’m in too deep to stop now.

First of all, the cells are extremely fragile. Yes, I know I was told they were. But not how fragile. I mean, I had used solar cells in science projects and out of blister packs from Radio Shack in the past. I knew what they were, but what I got was another order of magnitude thinner. These cells are like trying to solder a wire to a potato chip. Seriously!

But the fellow who sold them generously sent 50 of them for a 36 cell system, explaining that they were very fragile and he wanted there to be extra, so I went on confident that there was plenty of margin for error. 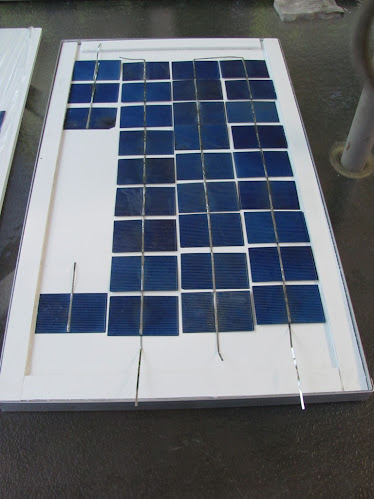 Then there is the frame construction. I continued researching it as I waited for the cells to arrive and assembled them. Most information I read and most of the materials for sale is aimed at home use and home-sized panels. The best material for those solar panels is a low-lead, tempered glass made specifically for solar use. It transmits 97% of light through it. Normal glass is lower around 92%. Energy-efficient glass that blocks UV and infra-red is horrible and should be avoided. Plexiglass is not bad at about 90%. If it’s UV stabilized and doesn’t yellow, which most is nowdays, it’s acceptable.

So what should I use for my bike? The tempered glass was out, because they don’t make it in custom sizes and it can’t be cut. Regular glass would either be too heavy or too fragile. So I was left with plexiglass which is readily available and can be easily cut. 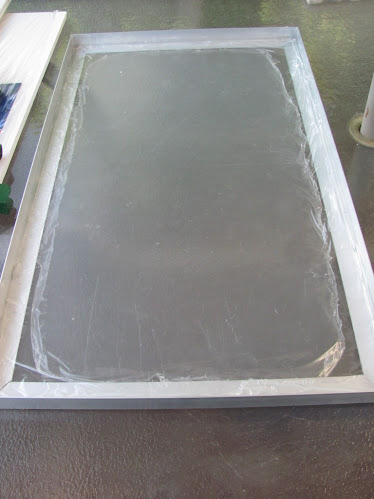 I went to a hardware store to get some and looked at 1/4 inch. It was too heavy, although I liked the stiffness. I settled for the next thinner type. Unfortunately, you don’t buy it by the square foot, or inch, you buy the sheet. Oh, they’ll cut it for you, but it was $45. I sucked it up and bought it.

So, I decided to not encapsulate the cell against the plexiglass, but to do it on a backplane and leave an air space between the “glass” and the cells. I thought about using coroplast. It would be ideal. Light, stiff. But I couldn’t get any easily, other than driving around looking for old signs by the side of the road. But I had some foam posterboard which was just as light and stiff. So I used it. It’s easy to work with and I hope it works. So far, so good.

I tabbed up the cells. 31 of them survived. I need 36. I’m waiting for the encapsulant to arrive. It should be here about Wednesday. I ordered another batch of cells. They should arrive about the same time. Fortunately, with practice, I’m getting better at handling the cells and should be able to finish this panel and even build another with the new batch. One thing that cost me a bunch of cells, other than just inexperience, is I started out using liquid solder flux. There is nothing wrong with liquid flux, it works great, but I spilled the bottle. Twice. Got flux all over everything. My hands. My tools. The cells. Everything got sticky and everything I touched stuck together. The cells were sticking together and breaking trying to get them apart. I couldn’t find a way to dissolve it at first. Water didn’t work. Alcohol didn’t. I ended up going out and buying a large bottle of acetone to clean it off. I ended up pouring acetone over the cells in a large tin pan and soaking them and gently agitating them until they came apart. Several were discolored and had to be cleaned twice. Too many didn’t survive. I found a few later still stuck together. Things went better after I switched to using a flux pen. I can take the blame for quite a few myself, but some of them just plain broke on their own for no reason. I swear one just popped in front of my eyes for no reason. So having a supply of spares on hand might be good. I’ll want to get this panel together and working and test it before I encapsulate it for good.

Update: I’ve completed the panel. It took quite a long time for the encapsulant to cure to the point where I could put it all together, but it’s done and working. The panel has been assembled into the frame, the junction box installed and the whole back coated with PlastiDip to seal it. I’ve added some more photos to the link below.

An album of more photos of this solar panel can be seen here.