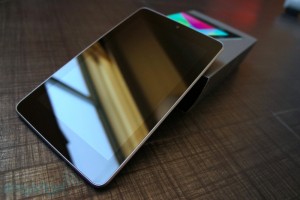 I ordered a Google Nexus 7 tablet on Monday. It arrived today, Wednesday. Yes, they shipped it 2-day Air.

Why a tablet? I wanted something a bit smaller than a laptop for travel. I have an Acer Netbook, but it’s so underpowered it’s no fun to use. I’ve gotten so I can (and do) rely on my Android phone for many of the things I do while travelling, so maybe the Nexus 7 can replace it.

My wife had tried a small tablet, a Archos 7.1, largely on my recommendation, and it was a disaster. It was broken out of the box and it took several calls to them to get it replaced. Even the working model was not ready for prime time, locking up frequently, refusing to charge, endless loops of updates and generally unusable. My son, Bryan, the Android guru, with several rooted phones, has it now and I believe might have made it work, but we never see it, so it’s probably gathering dust.

My Logitech Revue, an Android-powered set-top box, is also less than spectacular and underpowered. It barely does it’s job, but at $99 I guess I can’t complain that much.

On the other hand, the Android experience with phones has been quite satisfactory. I have heard good things about the Nexus 7 as well and Google has given oodles of them out at their industry conferences and to employees, so if it was a dog, someone would have called wolf by now.

So I had been watching the Nexus 7 for a while, wishing for it. I had a small windfall come in the other day and it turned out to be within $4 of the cost of the Nexus 7, so I ordered it.

So, how do I like it? How does it perform? Well, it’s early to tell, but so far, it’s been pretty painless and with having used my Droid Incredible, the learning curve is pretty small. It came already knowing my email address. I had ordered it through Google Play and my Google Wallet, so that’s not much of a surprise. I had to look up my Gmail password to get it to log in, though. One of the first things I did was to get Lastpass and Dropbox installed and working, so that I could get things working without running back and forth to another computer or my phone. I had an open public access on my wi-fi running, so that worked immediately, but I keep the password for my secure wi-fi in my Dropbox, so that came in handy immediately.

They must want to promote the Nexus 7 as a competitor to the Kindle and Nook, because it’s opening screen went to an E-book library widget, complete with a few free books to get you started. I got rid of that quickly because it annoyed me. Not only did the choice of books not appeal to me, either does the idea of buying any. I’m just not an E-book person and as clear as the screen is, it’s too small for my liking for reading. For email and web browsing, it’s fine, though.

The on-screen keyboard was very basic and also irritated me. I quickly installed Swiftkey 3 which immediately told me that I should be using Swiftkey 3 Tablet version. It wasn’t free, but became my first purchase using the $25 Play credit they give you with the Nexus7. I’ve been using Swiftkey on my phone for a while and find it easy to use and very good with it’s suggestions as you type. I can often type most of a sentence once it figures out what I’m saying just by accepting it’s suggested words.

I spent quite a while installing apps and making things work. The beauty of Google’s Android (and for that matter ChromeOS) being cloud-based makes it super easy to have access to all your information and resources without needing to copy things from another computer. I recently began using Google Play Music and instantly had the ability to play any of my songs.

I don’t see using it much for music, though. The built in speaker is pretty weak and not very loud. I’m sure it is much better with earphones plugged in. Of course, it would really shine with some stereo bluetooth earphones. I haven’t tried any bluetooth accessories yet, but it should be the way to go with not just sound, but keyboard and mouse if you want to do any heavy typing.

One thing I did try was video. Several videos are available when you get it, including a Transformers movie, but I also installed Netflix and checked it out with that. It’s a small screen, but it would be ideal for riding on a plane or back seat of the car. It does a fine job on your typical Youtube video as well.

It’s too early to give it a complete endorsement, but it seems to be a tablet that finally is ready for consumer use. Part of that might be the latest version of the Android OS which has a lot of effort put into tablet features. One of the first updates it did was the update to Jelly Bean 4.1.1. But so far, it’s been as easy and comfortable to use as my Android phone. If you’re used to an Android smartphone, you can pick up a Nexus 7 and feel right at home.

I’ve put a few photos of the unboxing up on my Opera albums.