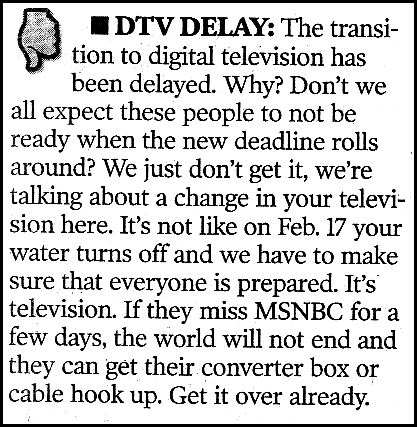 This article appeared in the Lockport Union, Sun & Journal on February 7th, 2009 in their Cheers and Jeers column on the editorial page. It appears to be contributions from their editorial staff, but no specific editor was credited.

While I certainly agree with the writer’s conclusion that the delay to the DTV switch is unnecessary, the article illustrates how people are not only confused enough on their own, they have the media to thank for it.

The flaw in the article comes when it says “If they miss MSNBC for a few days, the world will not end.“

The problem is, people who watch MSNBC are already on cable or satellite service and are unaffected by the DTV switchover. The people who will be affected by it, watching conventional, terrestrial, analog, “TV-antenna-on-the-roof-or-rabbit-ears-on-the-set” television don’t get MSNBC! MSNBC is not available over-the-air.

How many people with cable will run out and buy a converter box because this article made them afraid of losing MSNBC? Probably not many, because most of them have been confused by the media hype and the crawlers on the TV stations, that they’re immune to it by now. That’s why they delay is unnecessary.

The only reason to delay the switch is so that maybe by then the media will get the details straight and properly inform people instead of scaring them.

This post was cited today (2/12) on WECK Radio during the Reason talk-show by Scott Leffler, a good friend of mine.

He posted a link to this video on his blog:

3 comments on “No wonder they’re confused…”