As I’ve been cleaning up the ‘shack’ and playing around with some of the stuff I’ve collected over the years, I found myself marveling at the advancement a common piece of Ham equipment has gone through.

I recently added a K1EL Winkey USB keyer to my arsenal of contesting tools. It came as a kit and I built it in a matter of a couple hours. It’s a keyer, but it also couples the computer to the Morse Code sending process. 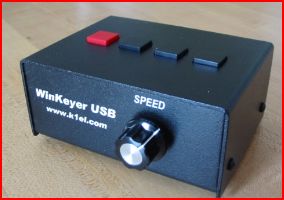 What’s a ‘keyer?’ It’s a device that helps you send Morse Code, especially faster than you would be able to do with a manual or ‘straight’ key. The common interface to a keyer is a set of ‘paddles’ which are just like a straight key, except two of them are placed back to back and a horizontal motion is used to operate them. Press one paddle, you get dots. Press the other, you get dashes. The keyer generates the stream of dots or dashes as long as you hold the paddle, so you can see a lot less effort is needed. I won’t get into the fine points here of ‘iambic’ operation or differe3nt paddle types. Let’s just say paddles are as collectible as any other key or ‘bug’ and vary widely in quality and price. They’re quite a status symbol to many Hams and preferences of which is best are very much a personal choice.

I have a number of keyers of various sizes and complexity. I plugged in a set of paddles, which I also have quite a few types, into the WinkeyUSB for testing. It performs perfectly, but the whole point of the Winkey is to NOT plug in a paddle! The reason I bought it is so that I can let the computer do the sending during contests. The contest logging software sends the information – callsign, exchange, my call, etc. – to the Winkeyer and it keys the radio just as if I had done it manually. No, better, actually.

Why? Because, during a contest, all the information I send is either repetitive, or something that gets typed into the log anyway. It’s simpler to keep my hands on the keyboard and let the computer do it. I still receive and decipher the other guy by ear. I just type what he sends in. So, I’ve gotten into the habit of never using a key or paddle during a contest. Many other operators keep the paddles plugged in as a backup, but I don’t. It’s to easy to bump them and interrupt the computer! If I need to send something that isn’t generated by the computer, there is a little ‘chat’ window that I can pop up and type into and it gets sent right away.

I’ve been doing this for quite a while. Over ten years, maybe more. In the past, there was just a simple interface on a serial port that I wired up and plugged right in to the radio. The logging programs are all able to generate the Morse code themselves. But a couple issues have come into play with modern computers.

1. Windows has taken most of the direct control of serial ports away from the program. It’s almost impossible to generate Morse code without an occasional timing issue where the sending will hang for a second while Windows goes off and handles some other task it thinks is more important. I have one laptop that runs Win 98 that I’ve hung onto just because it’s the last one that doesn’t suffer from that.

2. Serial port? New computers just don’t have them anymore. I can add one to a desktop and I can use a USB to serial adapter on a laptop, but the timing issue still exists. A keyer that plugs into a USB port is one sweet idea.

I still need a serial port to communicate with the radio. Yes, even the radio is in communication with the logging software. Band and mode information is automatically read from the radio and frequency and mode changes can be made form the keyboard. I have one adapter that has worked well until now. But, it’s been giving me a ‘Blue Screen Of Death’ when using it with this laptop and a radio. No solution in offered from the manufacturer and Windows blames the adapter… I’m going to try a different brand, one that had ‘Windows Vista Certified Drivers.’

So what did we do in the old days? Well, we logged with pencil and paper and used a paddle and keyer. While cleaning, I came across what used to be the State of the Art contest keyer, the MFJ Grandmaster. I looked online and MFJ doesn’t sell anything even close to it today. They’ve all been usurped by computer logging and keying.

In it’s day this was the keyer we all wanted. This one belonged to one of the Hams in our local club and we used it on Field Day. When he brought it to an auction to sell, I bought it and he joked that now I had to keep it to bring to Field Day. I’ve kept it ever since, although it hasn’t been to a Field Day in quite a while.

The thing with this keyer is you could program messages into the keyer and once they were there, all you had to do was push buttons to send. It couldn’t send the other guy’s callsign, but it could send the exchange after you had sent his call manually. It had a row of four buttons – actually five, but the last was a ‘cancel’ button – and each one had a message. But a switch at the left had four positions, so you had four banks of messages. We never used that many, but it was always cool to have more than you needed.

The big problem with the memories was, they were in volatile RAM, they would be lost if you turned the keyer off. A backup 9V battery would keep them if power failed, a real possibility on Field Day, but the On-Off switch was a killer. The battery didn’t last that long either. But messages were quick to program.

Fancier keyers of this type came along and are even still available today. Now they put their messages in non-volatile memory. They also do some slick things like send a serial number in contests that require one and increment it each time, or allow you to program speed changes as part of the massage. Still, they’re all obsoleted by using the computer to do it.

I used this keyer quite a bit for code practice. I added a straight key input on the back so that a straight key could be plugged into it. It had a pretty good sidetone oscillator and fair volume. It came in handy for a couple classes when I taught code. Later, even that got replaced by the computer with programs like SuperMorse and WinMorse.

So, I’ve been playing with the Grandmaster and it’s still a very nice keyer. I plugged in a set of Bencher paddles, which are of the same vintage and they send really smoothly. I looked online and saw the same keyer selling used for $40. They cost more than four times that new. I think I’ll hang on to this one a bit longer, even if I don’t use it much.

What does computer-generated Morse code sound like? Here’s slightly under a minute of code at 18wpm.