↓ Skip to Main Content
Home › Raves › Pack it in 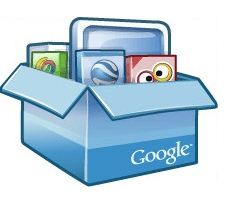 I mentioned Ninite a few posts ago as a useful site for setting up a newly installed operating system.

Google has a similar offering in it’s Google Pack. I was aware of it, but had never really looked at it. For some reason, I did today.

It’s similar in a lot of ways to Ninite, and offers a number of Google applications. But, since many of my favorite free applications do come from Google, it’s not a bad starting point. 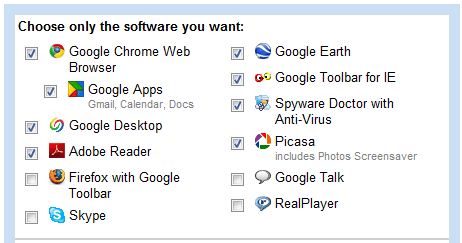 As you can see, it’s a pretty impressive list of goodies. You can pick and choose which ones you want just by clicking the checkboxes near them.

Some non-Google apps are offered as well, such as Firefox, Skype, Adobe Reader and Real Player. I hate Real Player, but always end up installing it anyway because it’s just a matter of time until something needs it. The first three are what I call essentials.

The only Google program I really recommend is Picasa. You can’t beat it for managing photos, which inevitably accumulate on your computer if you have a digital camera. The rest I can live without. I’ve used Google Earth, but it’s not something I use very often.

One Google program I like, but don’t see here is Google Sketch-Up. It’s a really cool program for creating vector-based drawings. If a picture is worth a thousand words, Sketch Up is invaluable to get an idea across without resorting to something like Autocad.

I don’t know anything about Spyware Doctor with Anti Virus, so I won’t recommend it, but I won’t discourage you from trying it, either. If Google has included it here, that’s enough of an endorsement that it’s at least safe to try.