Pulling my hair out 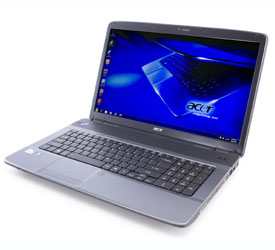 I’ve got a “new” laptop. It’s driving me crazy.

It’s a long story, so I’ll write it here. Too long for Facebook, which seems to get all my blogging attention these days. (Damn you FB!)

One the one hand it’s free. Free as in gonna cost you a lot of money, free. It’s an Acer Aspire 7736Z and it’s a beautiful laptop. Big screen in the desktop-replacement class. Too heavy to lug around, but nice to look at. It was given to me. It was also a basket case.

It was my wife’s laptop. She had it for about 2 years. Never took it anywhere, just used it on the kitchen table with the occasional trip to the living room. One day it started complaining about a low battery, but it was plugged in. Okay, bad charger, or cord. We’ve seen that before.

I looked the power supply over. It gave every appearance that it was working. Power measured at the plug was what it should be and the jack on the laptop looked and felt okay. Yet the battery would not charge and eventually, the laptop shut down and would not run.

Somewhere here, WordPress ate about 20 paragraphs of the story that I’m not going to rewrite. I don’t know where it went and can’t find a revision to revert to that has them. It’s just the kind of luck I’ve been having on this computer.

The short version of the story is: a local repair shop couldn’t fix it. Said the motherboard was bad. Did some research and found it was a common problem with this model. Opened it up to see if I could fix it. Decided against it. Found a guy in Brooklyn on eBay that fixes them and took a $120 chance and sent it off to him. Got it back. Put hard drive back in and found out hard drive was bad. $100 later new hard drive arrives and the restore discs refuse to work. The optical drive refuses to read any DVD-R discs, even though it made them. Hook up external drive, restore the computer and install software. Clean off crapware. Get ready to enjoy the large screen with a certain program I need all the screen space I can get – LabView, and that won’t install.

So the long story shortened is, I’m still using my old laptop…