In case my last post about the USB dynamo didn’t tip you off, I’m working on a third version of a solar power system for bikepacking. 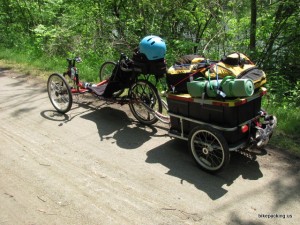 V2.0 on the GAP Trail. Solar panel covered up.

My first and second attempts were a 12 volt system in a bike trailer that used a large 22Ah SLA battery for storage. The first version used a commercial 15 watt solar panel, and the second used a 20 watt hand made panel. These were somewhat successful in that they worked, but I never really utilized their capabilities to fully try them out. The size and weight were drawbacks and even though I did take the trailer on at least one major trip, I didn’t use it all that much. I don’t think I ever used the 120 vac inverter.

Since then things have changed a bit in terms of my requirements. I’ve given USB powered bike accessories more thought and since they seem to be the way of the future, if not totally here already, it makes a 12 volt DC system a bit of overkill. That’s why I’m looking at the dynamo charging as well as more compact solar panels.

I’ve come up with a system that is small enough that it is not dependent on the trailer and is small enough to fit in or on a bike with panniers. The few accessories that use AA batteries, most notably my Dinotte 120R, and some other lights, can or do use rechargeable NiMH AA cells. I’ve had really good results using the Eneloop Low-Self-Discharge cells in the DiNotte for some time now and have a good supply of them. I have a charger that runs off 12 VDC to charge them, but I recently obtained one that does the same job from a 5V USB outlet. So everything can now work off 5V. 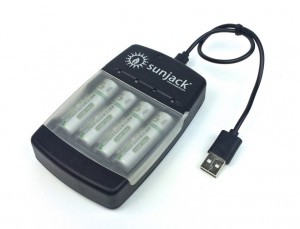 So, now I need a good 5V USB based system.

Another item I picked up is a USB battery pack, one of those things you plug your phone, or other USB-powered device into and it gets a recharge off the battery inside.

I looked over what was available, from those little ones the size of a lipstick case, to the largest available. I settled on one near the large end, (there is a limit to their size where they are not allowed on airplanes if they exceed it, so they all seem to stop short of that.) but at kind of a sweet spot cost-wise.

What I got is shown here. It’s 22,500 mah and has three USB outlets on it. Nothing else fancy, unless you count the obligatory LED flashlight, which is nearly useless. Most of these things are rated in milli-ampere-hours, which is silly. It’s really 22.5 Ah at 3.7 volts. That’s right, 3.7 volts is the native voltage for Li-Ion batteries, the high-capacity-to-weight batteries that make all these things possible. 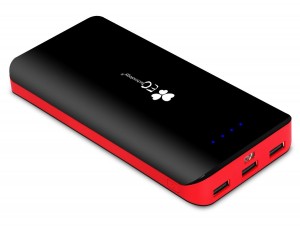 The 5V output for the USB jacks is provided by a boost circuit inside the pack, so there will always be some inefficiency due to that conversion. On the other hand, it should output a steady 5V until it quits.

I’ve already been carrying this in the seat bag on my Catrike and have had the chance to use it to charge my phone once when it was nagging me that it’s battery was dieing in the middle of a long ride.

I plugged it in and put the phone and battery pack in the same pocket together and it kept the GPS app running the whole time as well as leaving me with a fully charged phone at the end of the ride.

The indicator on the pack said that it had barely used any capacity yet.

It’s about the size of a glasses case, maybe a bit longer. Being a battery, it is solid and has some heft, but isn’t all that heavy.

So here’s the plan. Suppose I go on a long bikepacking ride and use the battery pack to keep my pnone working as well as charge any bike lights I might need to keep working. I can plug this in anytime I have AC power with a standard USB charger, but what if I don’t?

I’m working on the dynamo system. I’m waiting for a few minor parts to build the circuit that will convert the approximately 6VAC from the dynamo to 5VDC to emulate a USB port. The manufactured version was a bust, but I’m optimistic the one I build will work. The only question is how well?

The other plan to charge the battery pack is a solar panel. There are a wealth of them out there that advertise being able to charge a cell phone. Many of them are woefully undersized and really charge the phone from a battery that you charged ahead of time on AC power. I don’t need that and I understand the relationship between the size of the solar panel and how long it will take to recharge a given size battery.

So I looked at strictly panels alone. Again, I found a lot of models with varying prices and sizes, and I chose something with a balance between size, capacity, and cost. 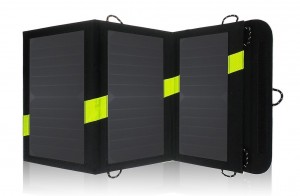 I came up with this model that looks almost exactly like the more expensive Goal Zero model.

It’s 20 watts, has two USB jack outputs, some regulating circuitry and folds up to about the size of a Kindle. It’s flexible, so it shouldn’t crack, but still pretty stiff. I wouldn’t bend it deliberately. But you could drape it across your panniers and hold it down with some small bungees to let it charge while you are riding.

I played with it a couple of times on my deck and let it charge my cell phone. It did a decent job giving about a half of a charge in a couple of hours.

This will not charge the battery pack fully. It might over a period of several days, but the idea is to keep topping it off every day so that the pack can be used to recharge things at night.

Between the solar panel top offs and the large capacity of the pack, there should be enough power to go several days even if it gets cloudy. As long as the occasional opportunity to catch up from AC power comes along, things should be good. I don’t use most of the lights during the day and only if I’m riding on roads. I rarely ride at night as well, so charging lights should be a low priority and happen infrequently.

Charging the phone directly isn’t the plan, either. Phones do weird things when the charging voltage drops off and comes back, like if the panel goes into and out of shadows. It might not bother them 90% of the time, but why chance it. What is the better way to go, is to charge the battery pack, then charge the phone (or other accessory) off of it later, like at night. Perfect.

Another problem is that the battery pack shuts down it’s outputs when it’s charging, so you can’t do both at once. So you can’t use it like a buffer between the solar panel and devices. 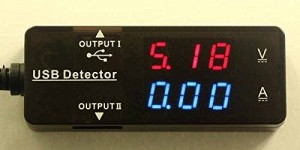 One other thing I picked up is a USB diagnostic device. It reads out the voltage and current passing through it so that I can see what is happening. It also works to split one port into two outlets.

So, there it is. Solar panel to charge Battery Pack to charge phone or NiMH batteries. All in a package the size of a three-ring binder.

The lights I’m using are not all AA powered anymore. The trend towards USB charging safety lights with built-in Li-Ion batteries is here to stay. I have two of the Knog Blinder 4 lights on the Catrike and have two Serfas Thunderbolt lights on the back of the seat on my Tour Easy. So far, they have been great, bright and long life on their charge. 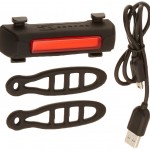 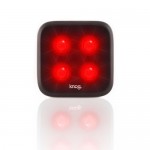