Who says Ham Radio is expensive?

Most people think that Ham Radio is an expensive hobby, requiring multi-thousand-dollar radios, big antennas on tall towers and high power. Well, a yacht is a great way to enjoy the seas too, but that shouldn’t stop someone who can’t afford a yacht from enjoying boating in a smaller vessel. 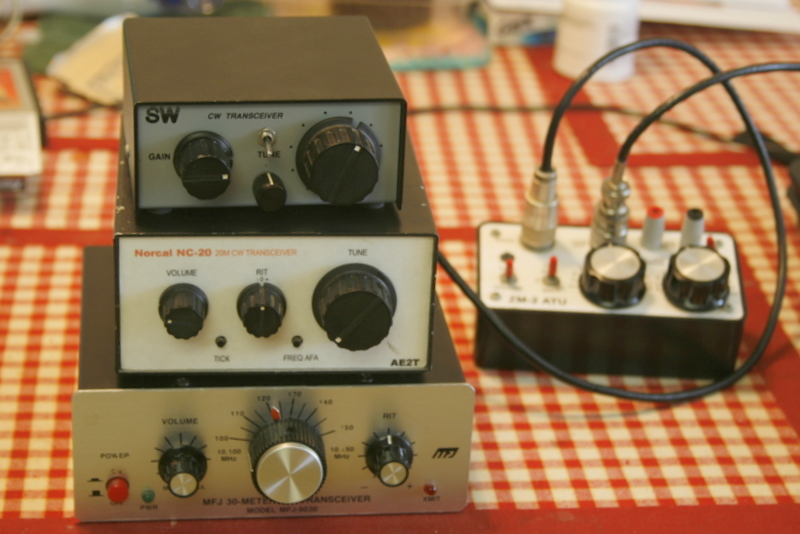 While catching up on my organizing, I came across three small radios that I acquired just a few years ago. Each one cost roughly $150 or less. Each one is a self-contained station, ready to go on one Ham band. They are all QRP, less than 5 watts power and only operate CW – Morse Code.

QRP operation is not the easiest way to go and may not be the best way to start out unless you really like the challenge, but after many years of experience, I can enjoy the minimalist experience of making contacts with just a few watts. They are the perfect radios to take along camping, or just to get outside for an afternoon and play radio from a picnic bench. 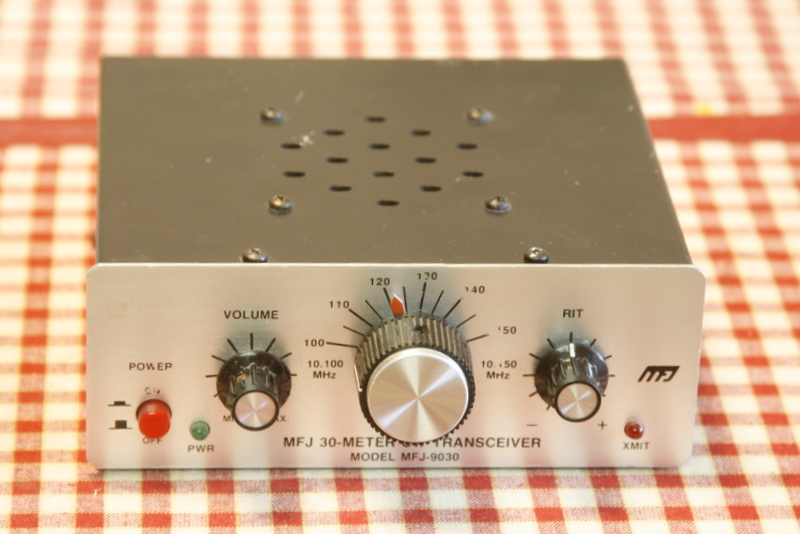 Let’s start at the bottom. This is the only radio here that I didn’t build. I bought it used at a hamfest. But I customized it by adding an audio filter inside to give it some additional selectivity.

MFJ is a low-cost supplier of all sorts of Amateur Radio items. Their equipment is usually not the fanciest, but is always functional and fills the purpose intended without costing an arm and a leg. They sold a line of single-band QRP radios and this was the 30 meter version. 30 meters is a CW and digital mode only band, so there is a lot of CW activity there. It’s really popular with QRP operators as well. It’s usually open to somewhere 24 hours a day and can have amazing DX (long-distance) coverage. I fired it up this weekend and contacted the guys at Lobstercon, a campout and Ham get-together held on the coast in Maine each year. 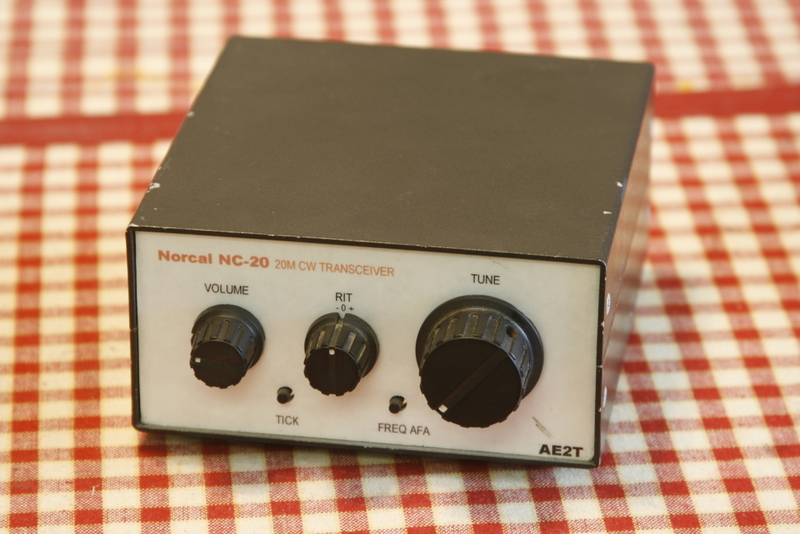 Let’s move up in frequency and down in size to the Norcal NC-20. This llittle kit rig was put out by the Northern California QRP Club, NORCAL a few years ago. It was a really unique project in several ways.

NORCAL has kitted many projects and they’re available to hams all over by virtue of the internet. In fact, to be a member of NORCAL, you just participate in whatever way you are able. They hold meetings in California, and from what I’ve heard, they’re well attended. But the majority of members never get to a meeting. There is also no dues! Yet they get a lot done, including designing and producing all sorts of cool kits. They’re in California, the right place for electronics and it shows, they have access to parts and resources of all types. In fact some of their kits were so popular, they’ve been picked up and produced commercially after the club’s run.

This kit is a small 20 meter CW rig. For a little rig, they squeezed a lot of extras into it. It has a built-in keyer, an Embedded Research Tick-2 (from Rochester NY!) as well as a frequency counter that reads the frequency and then announces it in CW in the headphones. No need for a dial, just listen and it tells you where you are. 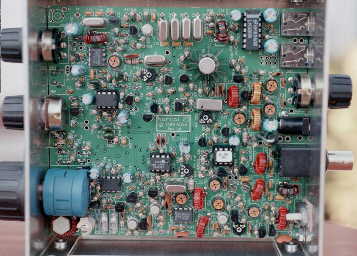 One more neat thing that I’ve never heard of since, the cost of the radio was quite reasonable, yet for each one they sold, another one was kitted up and distributed to people getting started in Ham radio in several foreign countries. It was never announced exactly where they were going, for fear of a backlash from the other governments, but it’s nice to know that my radio has a twin out there somewhere.

20 meters is a long-distance band. When it’s open, you can talk to stations all over the world. It’s mostly a daytime band, though, so if you want something for around the campfire at night, bring another rig too.

One nice thing about these radios being kitted and sold over the internet in a email forum, whenever there is a problem, or improvement, it gets discussed and announced on the list. I added several modifications to this radio, from some simple parts changes to improve performance, to changing the tuning dial to a 10-turn unit to make tuning smoother. I even made the easiest mod of all, upgraded the Tick Keyer to the Tick-4, a simple pull a chip and plug in a new one mod. 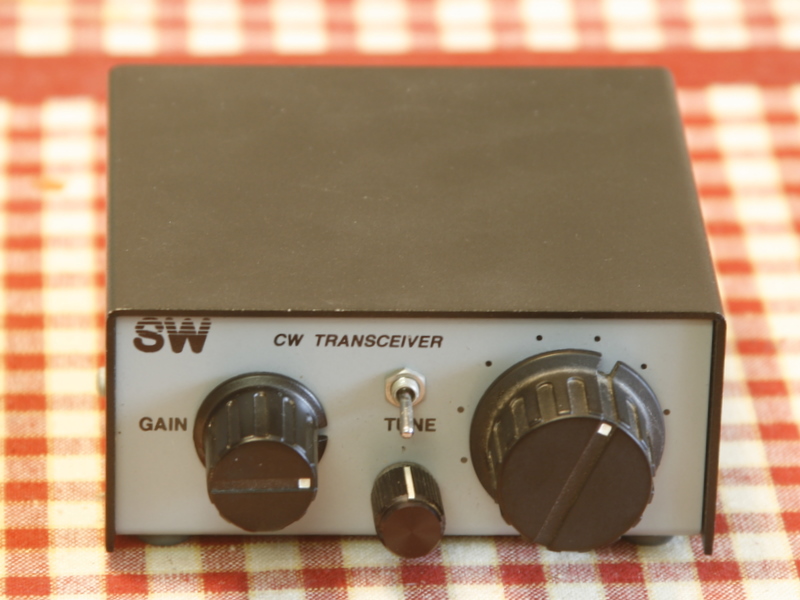 The final and smallest radio here is the Small Wonder Labs SW-40. It’s a little basic radio that was very popular as a easy kit to get started with. It’s still available today, and comes in versions for several Ham Bands. This one is the 40 meter version.

It’s a very straightforward design, so much so, that it was used in a course that taught basic electronics and radio design called Elmer 101. I never followed the course, but I understand it’s even been picked up and used in some college electronics courses. And it all took place online in the QRP-L mail reflector.

This was the first of the QRP kits I built. I had been reading the QRP mail list and it had been a long time since I had built anything. I decided I couldn’t go wrong – or broke – at $150 or less at a time. I enjoyed building and using them all.

As small as this radio is, I added more to it. It was made to be expanded. The little knob in the middle and the switch above it is a RIT module, which lets you move your receiver frequency around a bit without changing the transmitter frequency. It was an option for the kit. I also changed a few parts values in it to change the range it covers.

Another addon was the AFA – Audible Frequency Annunciator. It’s the same sort of thing as was built into the NC-20, where it tells you the frequency in Morse Code when you push a button. It’s no accident that NORCAL incorporated that idea into their kit. It was a popular add-on for many QRP projects.

And of course, I added a Tick Keyer inside. No straight keys for me!

40 meters is my favorite band. It is good for regional coverage all day. You can always talk to Pennsylvania or Ohio, it seems. But at night, it can be anywhere from across the continent to around the world. Now, that takes a lot of antenna with a couple watts, or you can accept a little less distance and talk all around the US. I used to sneak this rig into work and go upstairs into a workshop where someone had put up a long piece of wire to pick up AM radio stations. I’d clip onto the wire and get a ground on the building frame and use that piece of wire. It worked great! In the very first photo, with the stack of radios, the little box to the right in back, is a Emtech ZM-2 tuner. That was the magic piece that allowed me to use the random piece of wire. No need for a special antenna, when you can use what’s available.

I could have gone on building little sub-$200 radios, but after these, the Elecraft K2 came out and I had to have one. With all the options and modules for that, it kept me busy for quite a while.