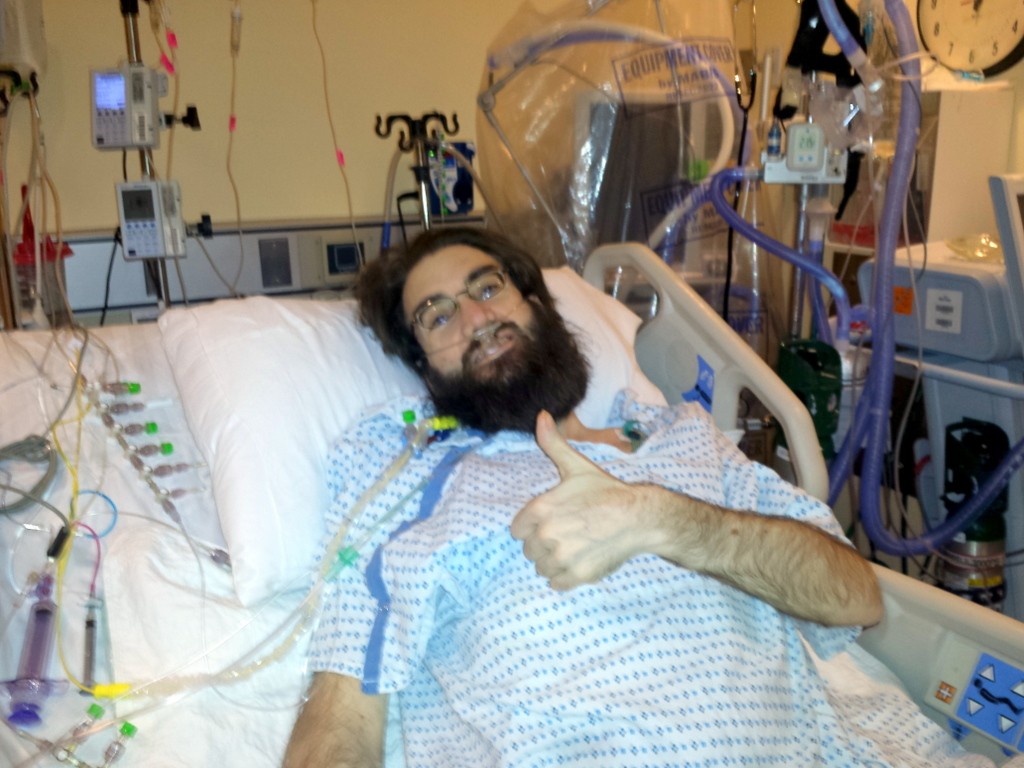 Things continue to progress and improve. I just spent some time in Frank’s room and he’s in very good spirits, eating a second breakfast and reported that he had “pooped” Sounds silly, but after surgery, it’s a major milestone.

Frank says hello to everyone. I’ve been telling him a little about everyones well-wishes and all the work going on behind the scenes on his behalf. He has his phone and his computer, but I don’t know if he will be allowed to use it in the ICU.

He was visited by Physical Therapy today and they had him sit on the side of the bed. He is not allowed to stand, or even sit straight up, because of an arterial IV near his hip that would be squeezed if he sat up straight. Otherwise, he’d be walking.

The number of IVs bags has decreased a lot, so soon they won’t need the IV that is in his way.

He is still using O2, you can see the cannula in the photo. But he’s needing less and less as the new lungs become acclimatized.

I’m changing hotels today. The initial three days I booked at the Howard Johnson’s is up and I wanted to just book some more time there, but it wasn’t available for four more days.But I found a batter deal just a little further away. It’s another Ho-Joe’s, but closer to the Bronx Zoo. It’s another one with the elevated rail line right in front, but there is also a bus route I can use right in front too.

I dropped Frank’s concentrator off at a UPS Store and shipped it home. He won’t need it again. Hauling everything the both of us had there on the bus was an ordeal. I had no way to hang on in the bus and no seat, of course, but I made it there. I also discovered a subway stop that I could take and not need to continue to the GWB Station. I think I’ll take this route every time. It’s one stop away from the hospital. Every Bronx bus but one goes by there on the way to GWB Station.

So, to get to the new hotel, I just jump on a different bus – Bx36 and go. I won’t miss the hike up the hill to the bus every morning.