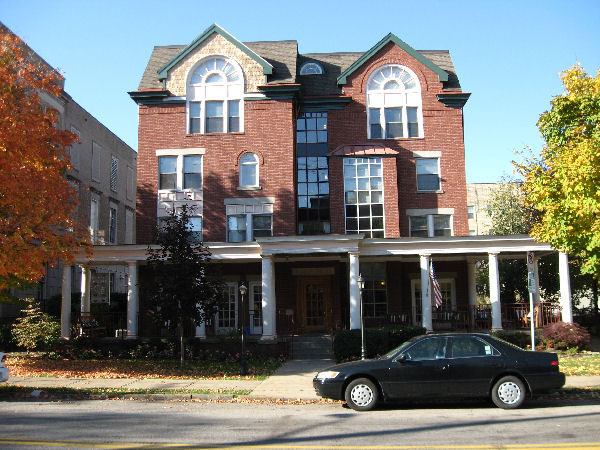 I’ve been staying at a place called Neville Family House. It’s one of four locations run by the Family House organization here at UPMC.

I didn’t know much about it, having stayed at a hotel the last time I was here in 2000. But after being up all night, by Friday I didn’t care if it was a cot in a closet.

It’s been really nice. It’s sort of like a hotel, but you do a lot for yourself, just as if it were your home. It sort of is, while you’re there. You make your own beds, clean up after yourself, are responsible for your own food and cooking and laundry. Yep, just like home.

But the people there are the best. The staff, which is really minimal and mostly volunteers, is great. They got me checked in and showed me around when I first got there. Every one of them, whether at night or weekend, were always friendly and supportive.

Last night I ran into a lady on the shuttle who had been camping in waiting rooms for three days. She finally had enough and found out about Family House, she was on the way to the Neville St. one, so I offered what little I knew and helped her get there. The funny thing was, there were other people on the shuttle going to some of the other Family Houses and they all were helpful.

Last night was also the first night I felt like socializing at all. I had eaten Saturday at UPMC, so I got in and went straight to my room, and watched TV until bed time. But this time, I had picked up some breakfast cereal and milk, so I could have breakfast. I was putting them away in the kitchen and some of the other people there invited me to dinner, so I ate dinner there.

They have been doing group meals. They pool food and pass the hat and make a big meal for everyone. I knew they were doing that, they offered on Friday, but all I wanted then was to hit the bed and fall asleep.

It wasn’t fancy. Hot Dogs and Hamburgers and someone made up some potato sald and baked beans. There was apple cobbler for desert. It was simple, but great. The best part was just sitting and talking with other people.

Everyone there has their own story. Whether they are getting treatment themselves on a outpatient basis, or staying to be near a loved one in the hospital, we all had something in common. There are so many hospitals here that are part of UPMC, that almost anything can be and is treated here.

But it was good to unwind for a while with company. We watched the Steelers game on TV, did laundry, and just chatted, until one by one everyone drifted off to their rooms for the night.