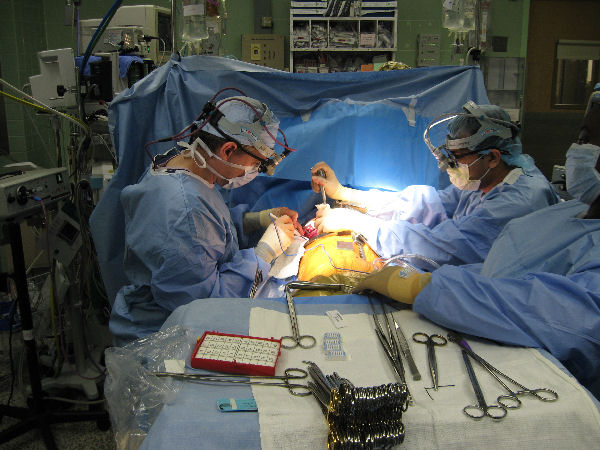 I finally got word that Albert was out of surgery. He was done a bit after 2:00pm, so he was in there nearly eight hours. He was one of two lung transplant they performed that day at UPMC. I have a hard time imagining a surgeon working eight hours straight in such a delicate operation. Of course, that’s my laymans’ impression, fueled by what I see on TV. The reality must be that they do so many of these here, that it’s like an assembly line and many people do pieces of the work. The main guy in charge just gets the credit.

But after a couple hours waiting I went downstairs to the Family Services desk to ask for an update. They finally got a few answers and I got to talk to the surgeon on the phone briefly. By that time, I was allowed to go visit him. I did, although he was still out, he seemed comfortable and looked good. As good as you can with a bunch of tubes and wires coming out of you.

He’s in a surgical ICU and will be there for several days. This part of it won’t be much fun.

I talked to a ICU nurse and she gave me phone numbers and other information so I can check up on him. The visiting hours are limited, but I can call anytime.

I got his camera back. I don’t know why, but he talked someone into taking his camera into the OR and taking some photos during his operation. Of course, now he’s done and not able to take care of the camera so, I was glad it was still there.

I made arrangements to stay at one of the Family Houses they have near the hospitals here. I’m at one called Neville Family House, because it’s on North Neville Street. It’s pretty nice, kind of like a hostel in some ways, with common rooms and lounges, a library, an exercise room and a big community kitchen. The rooms, though are private and almost just like a hotel, except you make your own bed and clean up after yourself. A small price to pay for the economical price. The best part was everyone was very friendly, although I didn’t have much of a chance to enjoy their company last night. All I wanted to do was sleep after being up 30+ hours. Of course, about 9:30pm someone decided to hold a fireworks display. It must have been homecoming weekend at PITT. But I slept pretty well.

There is no wi-fi at the Family House, although they do have one computer you can sign up to use. So I’ll do most of my communicating from the hospital.

Today (Saturday) I’ll visit Albert in the morning. The shuttle buses to and from the Family House only run in the morning on weekends, so I may not get back here later.