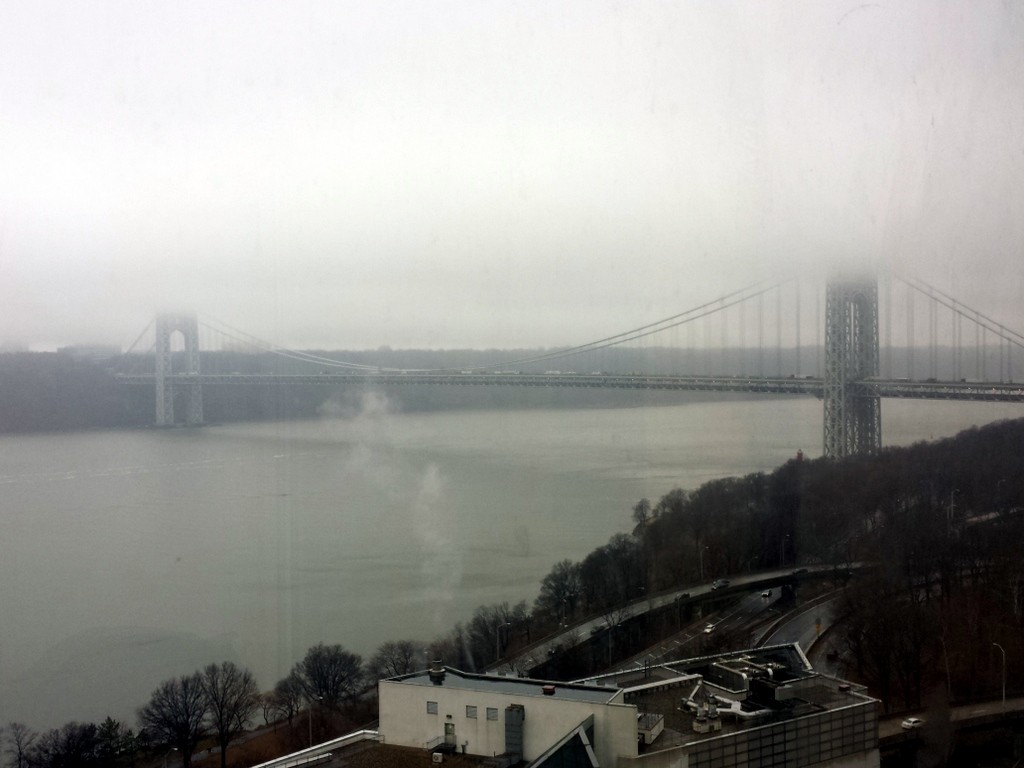 Today Frank left the CTICU and checked into a hotel. Well, not really, but it was close to one. He’s on the 9th floor Transplant Unit, which is near the McKeen Pavillion, the hotel within the hospital and around the corner is the Windows on the Hudson restaraunt. I looked inside, thinking maybe I’d have lunch there, but it looked like the wait would be too long.

While I was waiting for him to get settled into his room, I sat in a waiting area at the end of the hall. Had it not been a misty rain and foggy, it would have been a spectacular view of the Hudson River and the George Washington Bridge.

But, a sunny day will come, I’m sure in due time. Things are pretty sunny for Frank anyway. He’s happy to be in a normal room with a bathroom and shower. Only a few tubes left preventing him from using it.

He’s still got a little pain and they’re giving him medicine to manage it. So he’s mostly content to sit and rest most of the time. He does have his laptop set up and is online, so watch for his posts on Facebook and wherever else he hangs out. I’m sure he’s got a lot of fantasy football to catch up on. Priorities, you know.

Tonight is my last night reserved at the Howard Johnsons Bronx Zoo. It’s been an interesting stay. Nothing out of the ordinary and I hardly notice the trains going by anymore! It’s an odd place for a hotel. Not much near it that I see a need for guest accommodations for. Maybe the zoo in the summer?

It’s three floors and the first one must be underground, as I’m on the second floor and my window, if I could open it more than a crack, is low enough I could step out onto the sidewalk.

The main reason I chose this hotel, other than price and availability, was the train in front and the bus routes nearby. It’s relatively easy to get back and forth to the hospital. The train station – it’s an elevated railway at this point – is at the corner about 300 yards away. A crazy intersection to cross, though. Must be five roads come through there. But the train station and a bunch of bus stops are right there across the roads.

I took the bus this morning, the Bx36. It will go all the way to GWB Station, but I get off a couple stops before then end and catch either the subway or the M3 bus for the last leg to the hospital. It’s walking distance as well. When I got there, a bus was just pulling out, so I knew I had the maximum time until the next one, usually 5-6 minutes. There is a little Subway (food) shop there, so I decided to get a sandwich and take it with me. There wasn’t much of a line, but of course, the person ahead of me had to agonize over every decision. I got my sandwich just in time to catch the next bus.

The Bx36 bus only has a couple of miles to go, but it must have 30 stops. It takes forever, but at this time of day, at least it wasn’t too crowded and I could sit. It follows Tremont Ave. except for a section in the middle where it jogs over one street and goes down E. 180 instead.

I can’t get over how homogenous all the streets, buildings, and neighborhoods are. You’d think different areas would have a different character, but they are mostly the same, dingy, anti-suburban, grey and brick. If I nodded off and slept for 10 minutes, I would see the same thing when I woke up.

I don’t know what people do for shopping. All I ever see is delis and “Pharmacias” and 99-cent stores. There’s nothing wrong with those, but I haven’t seen a place where I could buy clothes yet, if I wanted to supplement my 4 sets of socks and underwear. I did find a real Rite Aid on Broadway, next to the real McDonalds I went to and I finally found a laundromat the other day about 3 blocks from the hotel. Today I noticed a small supermarket next to the Subway. (sandwich, not rail, but both were right there) It wasn’t a name brand store, but was better than little delis that only seem to stock Goya products. I’ve gone into a few and bought a bottle of soda-pop or snacks, but I would have liked to pick up a loaf of bread and some cold cuts a few days ago. I find a supermarket today, my last night. Too late.

There is a supermarket chain around called C-town or something like that. I’ve seen them off the buses, but never have gotten near one.

This hotel is about two train stops from the Super-8 I stayed at once before. Taking the train instead of the bus means going south-west into Manhattan then changing trains and going back north. I did that to come back today. It’s farther, but doesn’t take any longer. The worst part is waiting for the next train.

I was on the train today when we were at a station and there was an announcement that we were going to stay at the station for a bit. I didn’t quite get the announcement. Those things are never intelligible. We sat for a while, then the doors closed and we went on our way. Later, when I saw the news on TV, I realized it was the moment of silence for the two slain police officers.

So tomorrow, I pack up and check out then head to the hospital. Then I have to meet the Megabus again. A different train ride towards Downtown where I get off at 32nd Street – Penn Station and walk a few block towards the Javits Center to find the bus. at 6 o’clock. It’s supposed to be rainy, so that should be a joy. They just stop at the curb, there is no terminal or even a canopy or shelter. I get into Buffalo at 2:30am Christmas morning. Just being home will be present enough for me.