↓ Skip to Main Content
Home › Transplant › Some questions and answers

Some questions and answers 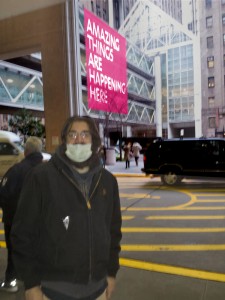 I get a lot of questions about Frank’s transplant. I’ve been through it before, so I pretty much have already heard them all.

I’m going to put them here along with answers. This will be a work in progress, so, I’ll add more as they come up. Feel free to check back PRN.

Q. Why did he need a lung transplant? Couldn’t they repair them surgically?

A. The short answer is, the lungs are damaged beyond repair. Cystic Fibrosis is the underlying cause and it is a genetic disorder, which among other things, causes the body’s mucous secretions to be thicker than normal, making them harder to expel normally. This build-up creates an ideal medium for infectuous bacteria and even fungii, to grow. Imagine having a perpetual case of pneumonia. Frank, and all CF patients, spend a lot of time doing respiratory therapy where they use a combination of inhaled drugs and mechanical percussion to break up and remove mucous and kill foreign organisms. Over time, the lungs are damaged beyond the body’s ability to repair itself.

Q. Why do a double lung transplant? Why not do one, then the other? Wouldn’t that be safer?

A. Since there is a culture of infectuous organisms living in the lungs, you wouldn’t want to leave an infected lung next-door to the new lung, passing on the infection. But, on a very short-term basis, they do replace one lung at a time, keeping the patient breathing using the other. The techniques for lung transplants have evolved over years, and it is amazing how it is done.

Q. I wanted to send flowers, but was told I can’t. Why?

A. Lung transplants, like all transplants, put a foreign substance (the new tissue) into the body. To keep the body from attacking and rejecting it, the doctors suppress the immune system drastically. This keeps the body from fighting the new organ, but also leaves the patient susceptible to outside infections too. Flowers may carry mold and fungus spores or bacteira that could be passed to the patient. So, thanks for the thought, but please don’t send flowers to a transplant patient.

The immune system is kept under control with drugs for the rest of the patients life. They will always have to be careful about exposing themselves to nasty bugs. It gets better with time, but is always a concern.

Q. Why did Frank have to go to NYC for his transplant? Couldn’t he have gone somewhere closer?

A. There are closer transplant centers, for instance, Cleveland Clinic, or UPMC in Pittsburgh, where Frank’s brother went. But Frank’s medical insurance, since he is on disability, is Medicaid, which is a state program. They require that in-state providers be used, if they exist. Fortunately, Columbia/New York Presbyterian is one of the best transplant centers in the world.

UPMC is also highly regarded, heck, they made a TV show about it, but isn’t in New York. Travel time is one consideration with Pittsburgh being about 4.5 hours vs. 7-7.5 hours to NYC. Of course, by plane, it’s an hour and a half.

Wings, Flights of Hope made that time savings possible, just as their predecessor, Angel Flight did for Albert.

Q. So, now that he’s had the transplant, he’s cured, right? No more Cystic Fibrosis?

A. No, Sorry, it’s not that easy. Since CF is a genetic disorder, it’s in every cell of the body. There is no cure. He still has CF in the rest of the body and will still need to take care of the other issues, such as the lack of digestive enzymes and other issues that CF patients never used to live long enough to have to deal with. In addition, he is now a transplant patient and will need to follow a regimen of drugs to manage rejection and a suppressed immune system.

Life will not be all Happily Ever AfterTM like in a fairy tale, but it will be at least possible when he’s able to breathe. Many CF Transplant patients can live a fairly normal life after getting their new lungs and the number of years they are able to enjoy is getting longer and longer. There is no guarantee in years, but I’ve heard of some who are still going strong after unheard of lengths of time by past standards.

Q. When will Frank be able to come home? I heard he has to stay in NYC for six months.

A. Yeah, we heard that too, but they’ve relaxed that requirement, possibly in the face of there being no place affordable to stay on a temporary basis. Currently, they are going to allow Frank to return home, but have to return frequently for tests and Doctor evaluations. Initially, it will be weekly, but will gradually be extended to longer and longer periods of time.

As for his stay in the hospital, that is nearly over. We were told at one point that he would be discharged last Tuesday (Dec 30th), then Thursday, now Monday. They are watching some chemical levels in his blood and adjusting his medications to fine tune things. It’s easier to keep him a few days more then to have him get home and need to turn around and come back.

Of course, the first weekly visit will feel like that anyway!

Q. How often does Frank have to go back to the hospital?

A. As time goes on visits will become less frequent, but he will be under the supervision of the doctors for the rest of his life, however long that is. As a transplant patient, he needs regular monitoring for any signs of infection or rejection. He has blood tests done locally every week. At the present time, he is supposed to visit NYP every two weeks, but that has been stretched out to three weeks twice because of scheduling problems. But for now, the official answer is two weeks. It will get extended as time goes on. He has bronchoscopies done every quarter and is coming up on the second one as well. (Happy semi-aniversary!) They are scheduled along with a regular visit so they don’t add another trip.

Q. What are the visits to NYC like? It must be fun, right?

A. Well, what we have found works is to drive in the day before and stay in a hotel in New Jersey, just across the George Washington Bridge from the hospital. The Hospital is in Washington Heights in upper Manhattan and a ways away from most of what we think of as NYC.

By the time we get lab work done and go through the doctor’s visit, it’s usually late afternoon and time to drive home. We don’t get to do much sightseeing, unless you count driving to find restaurants in Fort Lee!

Even if we wanted to make a quick stop someplace, parking is always a problem in New York. Once we leave the hospital ($31 to park there) if we go someplace, we have to find parking. If we left the car at tthe hospital, we could take cabs, but the affordable option of taking mass transit is not allowed for Frank because they don’t want him exposed to people in confined spaces.

So, it’s pretty much all business when we go. We make up for it by trying to find different places to eat our meals.

More to come. Submit your question as a comment.