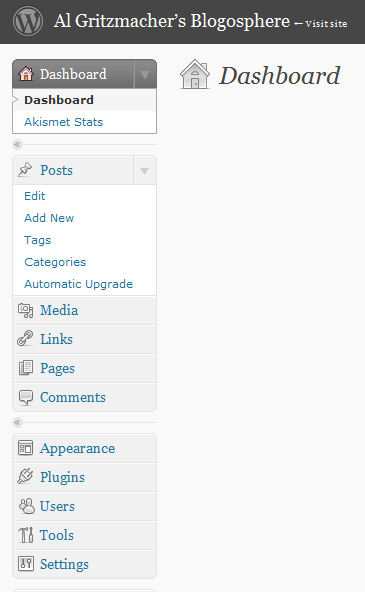 Well, I decided to live dangerously and upgrade the version of WordPress this runs on again, even though I was not at home and relying on the wifi at UPMC. The way things have been at home lately with my internet service, it’s probably just as reliable.

It seems to have worked, and I got through it without much trouble. I use a plugin, WordPress Automatic Upgrade, which does most of the heavy lifting for me, so it didn’t take long.

Ther plugin used to work really well, but the last time I used it, there were a few glitches with the database backup. That uses another plugin. I found out that by disabling all other plugins and changing to a default theme first, it all works and the upgrade proceeds smoothly.

The problem is, they do disable all the plugins during the upgrade process, they just do it automatically at a later point. If they would just move it up sooner, it would work without my intervention. They also put the site into a maintenance mode, which probably accomplishes what using a default theme does too.

But that’s all minor. The main thing the update seems to do is change the Admin interface, the part of the site nobody else sees except the privileged few. The screen shot shows part of the new Dashboard. They did clean it up and organize it really well. I like it, but there isn’t much for the user to see.