With the weekend spent in Rochester doing Ham Radio things and the weather being somewhat cool, I’d been itching to get out and ride again.

Today, it was warm enough and a beautiful sunny day, so I went off for a long ride. Actually it was a cool day, but not so cool that I needed a jacket. I had wanted to ride to North Tonawanda on Wednesday to go to an outdoor concert, but it was a bit chilly and I didn’t relish riding back after dark when it got colder.

I left home a bit after noon and rode towards North Tonawanda. I went the usual route that I drive to some of the bike club rides that start at West Canal Park. The roads are mostly pretty bike-friendly with wide shoulders and good pavement. Only one stretch had a terrible shoulder, but the road wasn’t too busy. No one threw beer cans at me for holding up traffic, anyway…

I continued on to Old Falls Blvd. and onto Sweeney Street and towards downtown N. T. I crossed the bridge into Erie County and went to the Riverwalk path. Following the path, I went to the south end of Isleview Park and turned back at the parking lot there. I considered going on towards Buffalo, but I’ll leave that for another day. 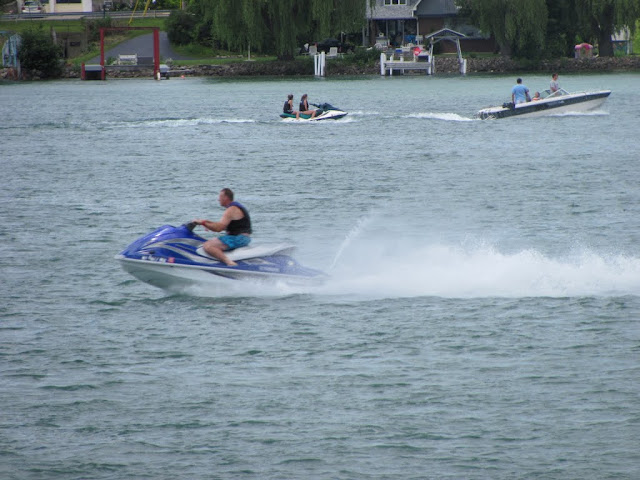 I stopped to take a few pictures and a bathroom break. Then I decided this might be a good place for a video. My new camera had the capability of shooting crude video, and I thought it might be interesting to show what it looks like riding the recumbent. So, I took the video you see at the top of this post. It’s pretty shaky, but that’s because I could only hold it with one hand while riding and it really is that bumpy. You don’t notice it until the camera shows it.

But it turned out pretty well anyway. I have another shorter one, but it’s more of the same. I took and added some music and -poof- it’s on Youtube!

After the video, I stopped for an ice cream cone at Mississippi Muds. You may remember this as the place that my daughter, Missy, and my nephews Matt and Andy, ran a 5K race from a couple years ago. I rode the bike across the street – there is a signal light right there, so it’s pretty simple and safe – and parked the bike on the lawn. There were some other bikes there, but mine got a lot of comments. After, I walked, dragging the bike across the intersection and sat at a picnic bench in the park to enjoy the cone.

Dragging sounds bad, but the thing is, with a trike, if you just pick up the rear wheel (I grab my rack) and walk, it will follow you anywhere. It’s actually easier than walking a regular bike. 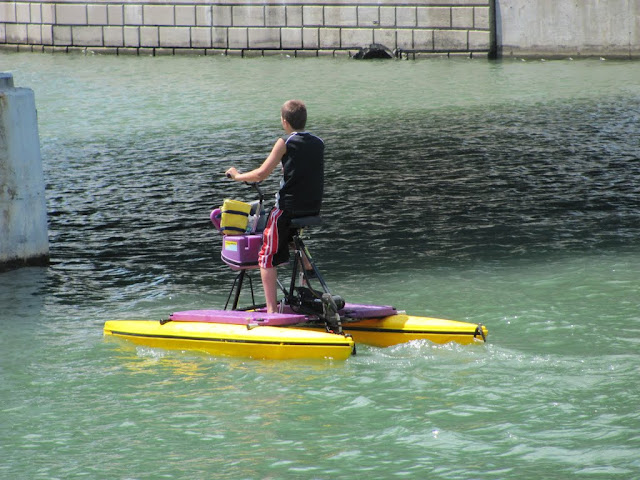 When I was done, I rode back towards N.T. again. Following the bike path, I then went to the Gateway Harbor and took the Ellicott Creek path. My intention was to hook up with the Amherst Bike Path. To do that, you turn into the park on the south side of the road, but I missed that entrance. Actually, I hadn’t even followed this particular path – it used to end short of the crossover into the park. So I stayed on it and kept on through the north side of the park. Eventually, it led me out to the parking lot at Creekside Drive which used to be a frequent stop on some of the bike club rides years ago when there was another Old Man Rivers there. Now it’s a bank.

But I knew Creekside and crossed Niagara Falls Blvd. at the light there and went on through the industrial park. I knew I was paralleling the bike path and could get to it at several places nearby. I eventually got onto the Amherst bike path and took it towards the eastern end. I was pleasantly surprised to find that the path had been repaved in many places and was in very good shape. It’s a very nice path that winds through a flood-control area that really can’t be developed any other way.

I got to the end without event and headed north on North Forest. Eventually, I hit Millersport Highway and stopped at the Burger King there for a drink. My water bottle was just about empty. I ran into a friend and showed off the trike to him and his son then headed off down Millersport.

Millersport Highway is a very busy road, but the shoulders are wide and in good condition. I wasn’t concerned with riding along it, but wouldn’t want to make a left turn. Fortunately, where I wanted to turn left (New Road.) there is another road that comes in at an angle and lets you take a right, go a ways then turn left onto New Road where there is little traffic and a four-way stop. Then you cross Millersport at a light, safely. 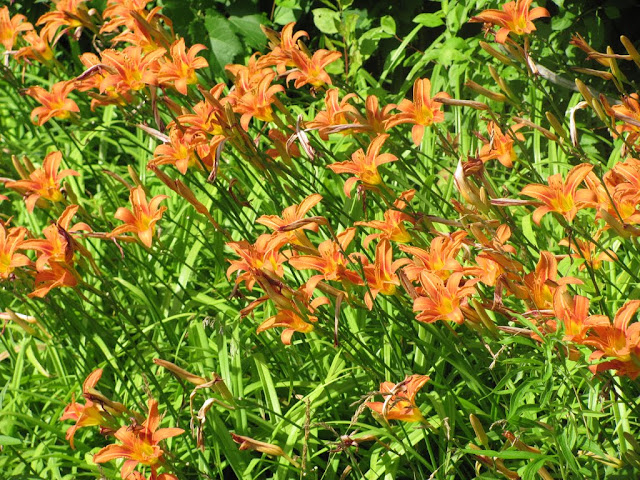 From there, it was straight down the road towards Lockport, crossing into Niagara County and onto East Canal Road. I stopped to take some pictures of some wildflowers growing along the side of the road, then made my way home via the Lockport Bypass (William Gregory Bypass) and down State road into Lockport.

I’ve found the only secret to riding a bike is patience. If you’re in a hurry to get somewhere, you’ll hate it. You’d be better off in your car. But if you take time to enjoy the ride and think of the trip as the goal, not the destination, it’s a lot of fun. The only thing it takes to ride long distances is time. You have to give yourself time on the bike and just keep going. It doesn’t have to be fast. Slow and steady wins.

I got home and checked the cyclometer. I’d done 50.8 miles in almost exactly 5 hours. Not bad for having no idea where I was going. It’s my longest ride so far on this bike.